Mauro Borioni and Prof. Andrea Simone discuss the conflict between bikes and heavy vehicles and highlight a recent initiative in Bologna that raises awareness amongst cyclists. 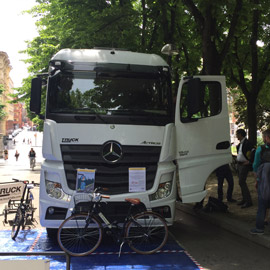 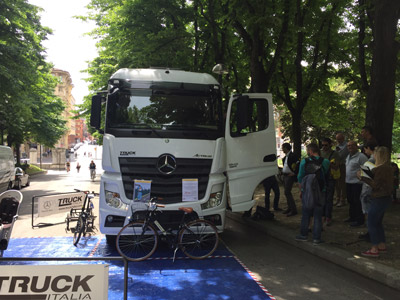 Roads are used every day by many different types of road users. Media and road accident statistics demonstrate that this coexistence is not without risks. This is particularly true on urban roads, where interactions between different vehicle types and modes of transport are unavoidable. To maintain road safety, it is important that road users pay attention to the other vehicles on the same roadway, and note their different characteristics.

A situation that is particularly risky for road safety is when bicycles approach heavy goods vehicles, buses or coaches. Owing to the size and shape of the cab, the driver cannot see several areas around the vehicle: termed ‘blind spots’, these are the areas that cannot be seen in a driver’s forward vision or rear and side-view mirrors. If a cyclist who – for instance, approaches a bigger vehicle at a junction just when it is turning – does not know that he has not seen by the driver, this can easily result in serious injury.

Some manufacturers of heavy vehicles are working to realise safer cabs, increasing visibility for the driver and providing more effective side mirrors. And this is a good thing. However, perfect visibility is impossible. For this reason it is also important to make cyclists more aware of this issue, so that they can help keep their own lives safe.

As a good practice to increase the consciousness and attention of cyclists on this issue, the SRM (Public Transport Authority in Bologna) and the University of Bologna have launched the awareness initiative called ‘#VediamociDiPiù – Condividiamo le strade in sicurezza’ (#Let’s see better – Share the road safely). This was carried out in Bologna (IT) on May 8th, 2016, at the annual edition of the Bike Pride – a cycling festival consisting of a cheerful bike ride through the city, with the participation of over 2,000 people in 2016.

The cabins of two trucks, supplied by the manufacturer Mercedes-Benz, were positioned close to the area of the participants meeting at the bike ride, and cyclists were invited to play a ‘role reversal’ game. They entered the cabins and realised what the drivers can see, or rather cannot see, while driving the vehicle.

The road areas not visible by the driver were highlighted on the pavement by a coloured towel that had been laid down. Some bicycles were placed in these blind spots, enabling people to see first-hand from the driver’s perspective that some bikes were surprisingly not visible at all.

Participants were also able to test the different levels of visibility between the two available truck models: an innovative model (Econic) against a traditional one (Actros). In this way people witnessed the results obtained by research in the field of road safety, allowing some producers to significantly increase the driver’s visibility, thereby improving safety, particularly for vulnerable road users such as cyclists.

After testing the inside view from the cab, cyclists were given a questionnaire to gather their feedback about their experience, and investigate their behaviour on the road when they approach a heavy vehicle, such as bus or truck.

121 people provided feedback, and the initial outcome revealed great amazement and surprise at what heavy vehicle drivers are not able to see, and how easy it is for a cyclist to disappear in a blind spot. 87% of them declared they were aware of the dangers when approaching a truck or a bus by bike. However, only 40% answered correctly when asked about the correct position to be taken when close to a heavy vehicle – behind it. 48% responded ‘front right’ – the most dangerous choice in case of a turning vehicle, considering also that this is the area where drivers see less.

Out of the three bicycles that were positioned in the critical area, only 4% of participants declared to have seen all the three of them, while 70% did not see any bicycles at all, when sitting in the cab of the older truck. Considering in the case of the new model, 29% saw the all three bicycles, and 61% were able to see two bicycles.

When sitting in the cab of the older vehicle, 49% declared to have a low or even very bad perception of the outside area. This was reduced to 8% in the case of the new model.

The front window of the older vehicle was not considered large enough to properly see the road by 78% of participants, while this percentage dropped to 23% in the case of the new vehicle.

The use of the side mirrors was considered intuitive by 48% of participants in the case of the older cab, but by 84% in the new one.

Participants were also asked which system they considered to be the most effective for the safety of road users in urban areas: the ‘increased glass’ was listed as the first option by 32% of participants, and as the second by a further 19% of participants; the ‘low cab’ was indicated by 29% as the most important, and by 31% as second; the adoption of ‘acoustic sensors’ was top according to 16%, and second by 26%; the adoption of ‘cameras’ by 17%, and 14%, respectively; and the ‘improvement of the mirrors’ by 7%, and 11%.

In conclusion, directly experiencing the driving conditions of a heavy vehicle driver, proved to be a very effective way of encouraging caution for cyclists. The raising awareness campaign carried out in Bologna, despite being low-cost and easy to implement, can therefore be considered an effective way to increase road safety. It is reasonable to assume that similar conclusions could be reached using buses instead of trucks. With this in mind, SRM is arranging to repeat the exercise soon using only buses.

The initiative was organised by SRM Bologna in collaboration with the University of Bologna, Mercedes-Benz and Truck Italy. SRM conceived of the ‘raising awareness’ campaign after a similar case study recently implemented by Transport for London, who shared it under the framework of the ‘Transport Safety and Security’ working group of POLIS.