The West Metro project is the biggest infrastructure project in Finland, extending Helsinki’s metro network to the city of Espoo. In the project’s first phase, eight new stations will be constructed with a further five built during the second phase. The metro will operate on 21km of underground lines in two parallel tunnels constructed through tough rock infrastructure. Ville Lehmuskoski, CEO of Helsinki City Transport and Matti Kokkinen, CEO of Länsimetro Oy, share further information about the project as the first construction phase is due to be completed in August 2016… 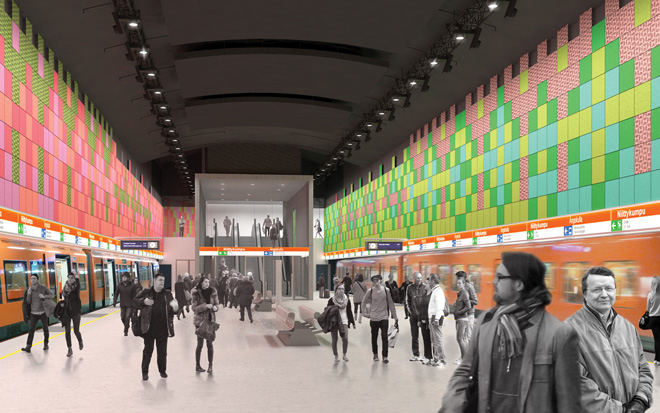 The new stations along the first phase of the 14km-long Ruoholahti– Matinkylä section will be located in Lauttasaari and Koivusaari in Helsinki, and in Keilaniemi, Otaniemi, Tapiola, Urheilupuisto, Niittykumpu and Matinkylä in Espoo. The 7km-long Matinkylä– Kivenlahti section of the metro line will be completed during the second phase of construction and will include five new stations at Finnoo, Kaitaa, Soukka, Espoonlahti and Kivenlahti.

In addition to the stations, 23 shafts will be built for emergency exits that are also used to house pressure equalisation, ventilation and smoke extraction systems.

An underground metro depot will also be constructed in Sammalvuori for housing and maintaining the metro vehicles.

Metro traffic started in Helsinki in 1982 with the Rautatientori– Itäkeskus connection. Since then the metro network has been extended in several stages with the latest station in Kalasatama having opened in 2007. Currently the Helsinki metro system has 17 stations.

One of the safest metro systems in the world

The tunnels of the West Metro are being excavated through tough bedrock in an economical and safe manner consisting of two parallel tunnels with fire compartments. Each tunnel is 6m-wide and will be excavated at a depth and location that are favourable from a geotechnical perspective. The distance between the tunnels varies between 13-17m. At the turnaround track section, the distance will be a maximum of 50m.

In an emergency situation passengers will exit the tunnel and enter the neighbouring tunnel through ‘smoke traps’ in the connection tunnels. The distance between connection tunnels is approximately 150-170m and exit shafts will be located every 600m. There will be a pedestrian walkway in the tunnel that will also be equipped with signals, safety lights and signposts to be installed every 25m.

The tunnel network will be equipped with fire detection and video surveillance systems and trains will have a built-in public address system for emergencies. These safety elements will require trains to operate undisturbed, otherwise the system will be stopped for some time whilst the disruption is cleared.

The metro is the fastest and most reliable mode of transport in the Helsinki metropolitan area and currently has two different kinds of metro trains. The older M100 trains were manufactured in Finland between 1977 and 1984, whereas the newer German M200 trains are from 2000 and 2001.

A major overhaul of the M100 trains was carried out during the 2000s. New M300 metro trains have been purchased for the extended metro traffic required for the West Metro. The M300 series metro trains have been acquired from the Spanish rail vehicle manufacturer CAF and will feature air-conditioning; LED lighting; passenger counting systems; and sprinkler units.

Helsinki City Transport had planned to automate the M100 and M200 trains, but the automation project with Siemens was cancelled at the beginning of 2015. When the West Metro service begins in August 2016, there will be drivers on the metro trains. All trains will operate at 2.5-minute intervals during rush hours between the Tapiola and Itäkeskus stations. The current interval during rush hours is four minutes. Trains are currently 135m-long but when services start they will be just 90m-long and operate at shorter intervals meaning that passenger capacity can increase by approximately 6.7%. The short intervals will be achieved using a new interlocking system acquired from the Finnish supplier Mipro Ltd.

The biggest infrastructure project in Finland

The two cities have agreed on a mutual distribution of costs along the city border, using the principle that each party meets the construction costs related to its own area. The costs will be divided so that the city of Espoo’s share is approximately 85% and Helsinki’s share approximately 15%. The government of Finland is providing approximately 30% of the costs.

Construction of the West Metro has a significant effect on employment and it is estimated that the project will require a total of approximately 6,000 person years. Over the course of the entire project, the West Metro will employ hundreds of planners.

Ville Lehmuskoski is the CEO of Helsinki City Transport which is in charge of operating metro, tram and ferry transport and developing public transport infrastructure in Helsinki. Ville is also Vice-Chairman of the Board at Länsimetro Ltd. In 2012-2014 Ville was the Director of the Traffic Planning Department in the city of Helsinki. Previously, Ville has worked as the Director of the Public Transport Planning Department at the Helsinki Region Public Transport Authority and was a transportation consultant for 10 years.

Matti Kokkinen is the CEO of Länsimetro Oy (West Metro Ltd) – a company jointly owned by the cities of Espoo and Helsinki that is tasked with building the West Metro. Before the Länsimetro project, Matti worked as a Project Leader on the Suurpelto project in the city of Espoo, and previously spent 15 years as a consultant in traffic telematics and traffic planning.