Smart City – a revolution or just a smart slogan?

Independent transportation and public service management consultant Jakub Slavik, looks at the concept of the Smart City and why it is important to beware of smart slogans presented as revolutions. 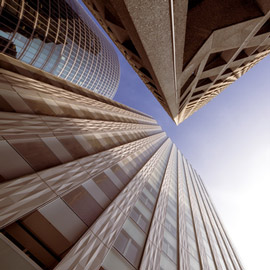 Every piece of technology is becoming “smart” – from a washing machine to a power grid. Even cities are becoming “smart”. Does it mean a revolution in technologies that have suddenly turned intelligent and now they pass their intellect on us, poor ignorant city dwellers? 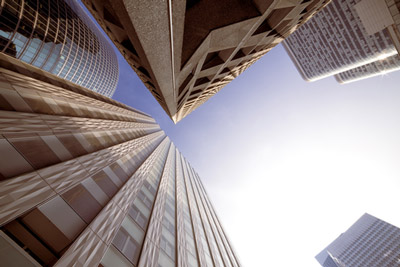 A technological revolution is not on the agenda, I suppose – but a managerial and economic revolution in implementing technologies? Well, perhaps. Let me show a couple of simple examples:

Almost every device – including vehicles – has numerous micro-processors of different purpose, size and complexity producing different data in different formats. This data is collected, processed and stored. And that was the end of the story until recently…

Photovoltaic cells have been a great source of power for space devices for many years, but too expensive for any other purpose until recent times. Their principle is still about the same, but they can be seen almost everywhere.

Electric cars have been produced in series since about 1990s. But they were mainly a domain of electrical and environmental enthusiasts until recently, especially because of their limited range and high price. This has been changing although the electric vehicles’ operational parameters have not changed dramatically.

So what has happened?

There is a strong market pressure towards making business processes in manufacturing and services more effective. “A market” in a way, is also public interest in cities and regions being pleasant as well as prosperous places to live. Public sources with their subsidies reflect the societal demand and behave like any other customer – sometimes sensibly and other times not.

This pressure results in changes – not so much in technologies but rather in their use. Let’s have a look at the examples cited above.

Data produced by information technologies become unified in terms of formats and protocols and shared. This results in considerable cost reduction as well as in increased benefits of such integrated systems. The FourC solution is a good example.

The use of renewables such as photovoltaics (but not only that) is becoming much cheaper due to the economy of scale. When used for electrolysis, they can power – through hydrogen fuel cell powertrains – fuel cell electric buses such as those on duty in Aberdeen.

Renewables, however, often de-stabilise power grids that have to be supplemented by bi-directorial information channels – and this is what is called smart grid. A smart micro-grid using renewables can be dedicated e.g. to electric car power charging, as the Zem2ALL project shows.

Passenger and utility electric cars are used especially in various kinds of organisations by their scheduled (and schedulable) rides. Fleet managers – not sole enthusiasts – are the strategic customers. Related financial and operational services come in question, too, as a necessary condition for attracting this customer type. Information technologies such as that introduced by ViriCiti facilitate the operation and reduce the “last mile anxiety”. Benefits from the access to restricted urban areas at restricted time are very valuable especially to urban logistics companies. Electro-mobility is then not just a matter of environment protection, but also a tool for making the logistics more effective.

Electrified urban transit saves energy due to the vehicles’ more efficient powertrains. The saved power can be utilised by battery electric buses such as those presented by the ZeEUS project (any many others).

Quiet, clean and attractive public transport in combination with various apps for passenger information and park finding can “sweeten” the necessary private car restrictions in city centres. The stick is simply inefficient without the carrot – and vice versa.

As we can see, the use of “smart” or “green” technologies is not an objective per se, but a means for making life in cities and regions pleasant and attractive and hence, making the cities and regions prosper. The pressure towards overall efficiency and effectiveness in the technology use implies a pressure towards a strategic approach to managing urban and regional development. The result is the smart city concept as a managerial strategy brought to everyday practice by means of particular investment or innovation projects using modern technologies.

These projects could easily exist independent of the smart city concept but smart city makes them lock among each other like a puzzle (see image below). They do not compete against each other for scarce resources but use synergies from the smart city key pillars: clean mobility, smart districts/smart energy and information and communication technologies. The smart city concept can also comprise the city’s memberships in various existing international projects – smart city Oslo, for example, utilises its participation in the fuel cell bus project CHIC and the electric freight car project FREVUE. 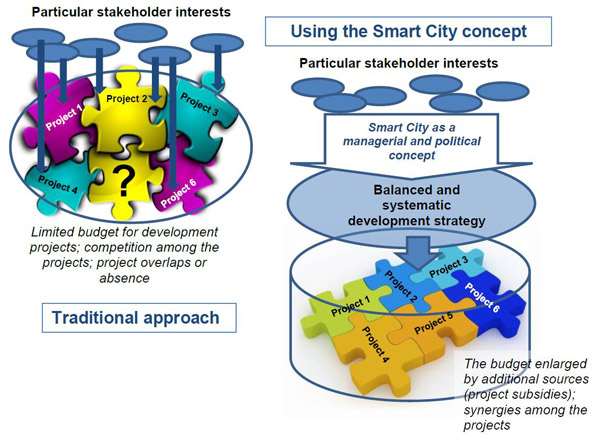 Jakub Slavik is an independent business consultant in transportation and public service management.

One response to “Smart City – a revolution or just a smart slogan?”