In his latest blog for Intelligent Transport, Graham Ellis looks at alternative fuels for buses and finds out how board directors down to fleet engineers can reduce operating costs and improve the environmental credential of their vehicles. 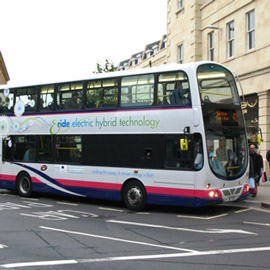 A lot of people in the bus industry from main board directors down to fleet engineers are looking at how they can reduce operating costs and improve the environmental credential of their vehicles. However this has been an on-going challenge for at least the last forty years and many different solutions have been explored, tested and in some cases abandoned as the technology was just not there to allow the promised outputs to be achieved.

“The holy grail of engineers is to find an environmentally friendly power source that does not cost more than the national debt of their home country!” 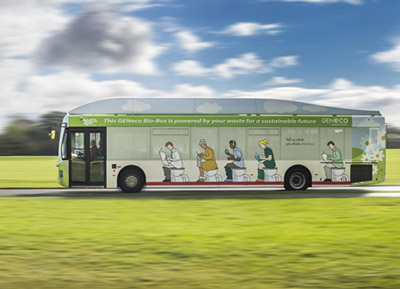 In the case of gases there is a requirement to have either a storage system to hold the gases at high pressure to ensure that the gas is stored in a liquid form or to have a compressor system to compress natural gas into a liquid format. In most cases this high pressure requires a specialist heavy duty storage tank and, when the liquid gas is transferred to the vehicle it has to be pumped into on- board high pressure storage tanks (shown in the London Buses illustration). The other problem; for the maintenance team; is that any mechanic working on the gas system has to have a separate gas fitter licence to comply with UK safety legislation, this can mean a loss of flexibility when maintenance is required as not all mechanics will be trained due to the high cost of gaining and holding the safety certificate. 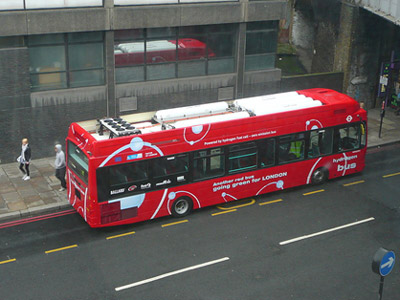 In the case of hydrogen there are other difficulties in that the gas is highly flammable and extra care has to be taken to prevent leaks that could lead to ignition. However to date there has been no reported incidents of vehicle fires when using hydrogen as a power source.

All of these gas propulsion systems are well proven over many thousands of miles and in varying temperatures and operating environments.

Bio-methane fuel is now being more widely used, Reading transport have been powering a fleet of 112 Scania/Alexander Dennis double-decked buses since April 2013 and RATP are also trialling the “poo bus” on routes around Bristol and Bath, currently the bus is operating on route No.2 in Bristol (this is an in-joke as No.2 is English rhyming slang for Poo)

A new gas system coming into view is that of a diesel/liquid nitrogen mix. The vehicle utilises the liquid nitrogen when pulling away from stops, where conventional buses emit the most NOx and CO2. At speeds under 20mph, liquid nitrogen will be drawn from a low-pressure insulated storage tank and goes through an evaporation cycle, and drives via a multi-cycle Dearman engine. The Dearman engine is a novel piston engine driven by the expansion of liquid nitrogen or liquid air, to produce clean cold and power.

Liquid nitrogen expands 710 times between liquid and gas phases and this expansion is used to drive the pistons of an engine. Dearman engines operate like high-pressure steam engines, but the low boiling temperature of liquid nitrogen means that low-grade or ambient heat can be used as a heat source, eliminating the need for a traditional fuel.

A unique feature of Dearman engines is the use of heat exchange fluid (a mix of water and glycol). When it mixes with the extremely cold nitrogen, this fluid enables a quasi-isothermal (near constant) expansion and significantly increases the engine’s efficiency. Crucially, the only emission from a Dearman engine is air or nitrogen, with no emissions of NOx, CO2 or particulates.

Moving to other “newer” fuels we start to move into the electrical arena where either battery electric systems or full electric systems are utilised. Bus operation normally allows routes to be planned on a daily basis and vehicles can be allocated to routes where the performance capacity of batteries is not challenged or where charging points are available at the terminus points or even at mid-route points.

Most operators have tended to utilise hybrids to give them maximum flexibility on which routes vehicles are allocated to. The benefit of this system is that in city centres the vehicle can run off the battery pack and then move to a small diesel generator to recharge the batteries when on longer runs away from the city centre. London has however built on earlier experience in places such as Greater Manchester; where I ran battery electric buses back in the 1970’s; and opted to trial full electric buses. In this instance they are double-deckers built by the Chinese firm BDY and are expected to be able to achieve 180 miles in service each day without recharges etc. This is a massive leap forward for electric vehicles on day-to-day city operations. The reason for using pure electric is that the power source is pollution free at point of use, ignoring the fact that may have been generated in a “dirty” power station. 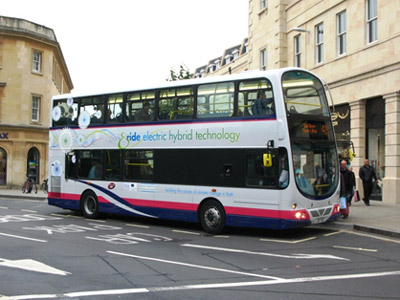 Nottingham are also trialling full electric buses and will have 59 vehicles in service by the end of 2016, this will be the largest fleet of electric vehicles in Europe.

Some operators have gone in a different direction by using a hybrid trolley bus where power is taken from overhead lines and off wire running is achieved by using a small diesel driven generator. 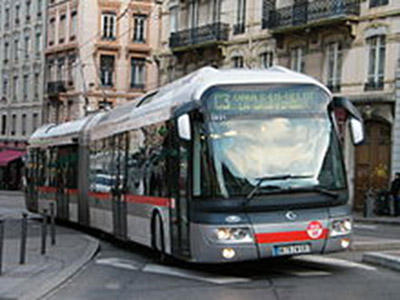 Although not an alternative fuel other methods of powering buses have been trialled utilising such things as high-speed flywheels and compressed gases in storage units. The idea of the flywheel is that whilst the vehicle is in motion the flywheel is spun up and energy is stored within the unit, when the vehicle stops the flywheel continues to spin and on pull away the energy stored in the flywheel is used to accelerate the vehicle up to a set speed. One disadvantage is that the flywheels work better in a vacuum and this is difficult to achieve  and the drive train is more complex, however this idea has been around for many years, I remember a Volvo double-desk bus operating out of London’s Palmers Green garage for a period of time back in the 1980’s.