Ahead of his article in Intelligent Transport Issue 2, Tomás Melero, Head of Management Control Room CITRAM at the Madrid Public Transport Authority, gives a quick outline of how CITRAM operates for the Madrid región. 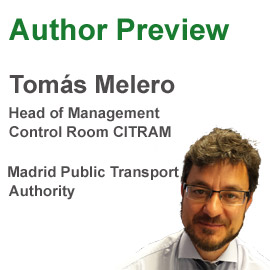 How public transport control rooms operate is a topic that will feature in Intelligent Transport Issue 2 2016. Ahead of his article, Tomás Melero – Head of Management Control Room CITRAM at the Madrid Public Transport Authority gives a quick outline of how CITRAM operates for the Madrid region, which will form the basis of his article in the next issue of Intelligent Transport.

A project lead by CRTM: collaboration with more than 40 companies

CITRAM revolutionises the traditional concept of management thanks to a public transport management system which operates in real-time. This implies not only a technological progress, but also a cultural one where all the involved agents (clients, transport operators, emergency services etc.) find an environment for collaboration and coordination in order to get the best results.

The public transport system for the Madrid region is a complex intermodal system, consisting of various modes of transport. Two major sub-systems can be distinguished:

Both sub-systems are connected by a series of large interchanges that surround the central area of the city of Madrid, channelling radial mobility between the capital and its metropolitan rings.

The system is made up of over 40 public and private operators with a wide range of transport services and infrastructures. In this complex mobility context, the responsibilities of CRTM covers the provision of public transport services to the inhabitants of the entire Madrid region and associated municipalities, managing all the operating companies and the different arrangements between them.

The majority of public transport users in the region are ‘multimodal’ and they need dynamic, timely information at system level in order to efficiently and effectively make journeys. To achieve this, CRTM is working to establish technological integration as the core of their strategy; this is a commitment to the future with present results which CRTM responds through CITRAM as one of the fundamental basis of this integration.

This is possible thanks to intensive use of ICTs and the management of information to support decision-making, modifying the public transport authority’s concept from observers to active actors involved in real-time management. In this new environment, objectives can be reached, including new client approaches with homogeneous, accurate and relevant information that covers all the public transport modes in the hands of clients (more than five million daily) and for the capacity of sharing resources to improve management etc.

To achieve all of this, CRTM has developed ad-hoc tools that integrate data from different sources – not only from public transport but from other sources such as the Madrid City Council for traffic data and emergency services.

All these characteristics make Madrid’s CITRAM a pioneer centre in its field; read more about its innovate management role in the next issue of Intelligent Transport (April 2016) by clicking here to sign-up and receive your free print or online subscription.