Public transport in Poland – the reality and prospects

Posted: 25 February 2016 | Adam Karolak, President of the Chamber of Urban Transport (IGKM) | No comments yet

Recent years in the urban transport sector in Poland were characterised by large investment projects and purchases of bus fleets and tram rolling stock. However, the overall number of passengers decreased slightly, which is in contrast with high funds allocated annually for transport investments. As it turns out, they do not guarantee a systematic increase in passenger numbers in the country. Adam Karolak, President of the Chamber of Urban Transport (IGKM) describes the situation of public transport in Poland, emphasising the role of EU funds and organisational activities that can attract new passengers… 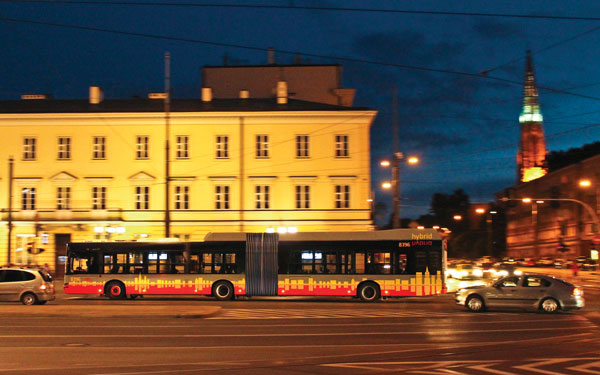 The public transport situation in Poland

Urban transport represents the major part of passenger transport in Poland in terms of passenger numbers. It exists in about 260 cities and municipalities inhabited by 17 million people. Urban transport enterprises carry in the region of 3.7 billion passengers annually, which represents approximately 80% of the total number of passengers in the public transport sector. In towns and cities, bus services are the main form of urban transport. They are provided mainly by municipal operators operating a total of around 11,500 buses. Tram systems exist in 15 cities with a total number of 3,342 trams running along 2,342km of tracks. Trolleybus systems operate in three cities: Lublin, Gdynia and Tychy. Together, these cities have 215 trolleybuses and approximately 180km of traction. The only existing metro system in Warsaw consists of two underground lines with 28 stations, and a total length of 29.2km.

In Warsaw, the share of travel by public transport is nearly 60%, which ranks the capital of Poland quite highly among major European cities.

As shown in Graph 1 on page 60, the period of transformation began in 1990 which led to a significant decline in passenger numbers. It was also a period of organisational and financial collapse of public transport, which lasted roughly until 1994. While in subsequent years the reconstruction and strengthening of public transport was observed, it has not resulted, however, in a general increase in passenger traffic, which in the whole country (with the exception of the largest cities) is continuing to fall.

The directions of urban transport development in Poland is set by EU and national strategic documents, such as: the White Paper on Transport (COM [2011] 144); Transport Policy for 2006-2025; Transport Development Strategy until 2020; National Strategy for Regional Development in 2010-2020: Regions, Cities, Rural Areas; and the National Urban Policy 2023. The main acts include the Regulation (EC) No 1370/2007; Act of 16 December 2010 on public transport (PTZ Act) and other legislation.

The response to the problem of urban sprawl is a recent act allowing the creation of metropolitan associations, which entered into force on 1 January 2016. For instance, it allows conducting a common policy on the development of an integrated public transport system for the metropolitan area.

The public transport sector in Poland is also influenced by the operational programmes co-financed by the European Union. Between 2000 and 2013, Poland used the opportunity to improve the quality of public transport services, obtaining nearly €3 billion. Thus it became the most active country using the funds for developing bus, trolleybus and particularly tram systems. Of special importance was the restoration in December 2015 – after half a century of absence – of a tram system (three lines) that was built from the ground in Olsztyn.

Now we are entering into a new EU financial perspective (2014-2020) in which Poland is to receive further significant funds to the amount of €82.5 billion; giving public transport another chance. In the coming years, EU funds will still be a significant source of funding for regional development in Poland, in which public transport plays an important role. For the development of low-carbon public transport in cities, approximately €2.3 billion is planned to be allocated.

Transport of the future

Investing in infrastructure, as we have experienced in the previous perspective of EU funding, does not guarantee a systematic increase in passenger numbers – so how can we attract a larger number of urban residents to public transport? Bearing in mind the requirement of sustainable development, transport operators and organisers should first of all adjust their offer to changing needs in terms of directions and frequency of services.

However, creating conditions for the organisation and operation of transport takes place primarily at the municipal level and is focused on the ongoing activities and long-term planning.

New possibilities are open within the perspective of EU funding (2014-2020) which will affect projects for the development of public transport, resulting from the low-carbon economy plans of cities, aimed at improving its safety, quality, attractiveness and comfort. In cities with tram systems, the development of this kind of transport will be preferred. The Polish government declared that 168km of tram lines would be created by 2022. Polish cities have already made plans for a new EU perspective, and ambitious plans in this regard have earmarked the following cities:

In subsequent years, the development of tram and trolleybus systems, but also the purchase of buses which meet the highest environmental standards, will be a fundamental priority.

Investments will also include other means of transport. In Warsaw the extension of the metro network will be continued. In 2015 the central section of the second metro line (seven stations) was opened. The course of the route of the M2 will be running from the western part of the city to the right side of the Vistula and will end in the north with a southern arm to Goclaw settlement. The length of the entire second metro line will be approximately 31km-long. By 2019, the second line will be extended by three stations in the direction of Wola district and three stations towards Targowek. The extension of the second line in a westerly direction and to Goclaw settlement (on the right side of the Vistula) is planned for the years 2021-2030.

In the cities where tram and metro systems do not exist, other low-carbon forms of transport that meet Euro 6 will be preferred. However, the purchase of vehicles with alternative propulsion systems (electric, hybrid, CNG, LPG, biofuels, hydrogen, etc.) will be the priority.

Furthermore, large purchases of new low-emission buses are planned, for example the MPK in Krakow is planning to buy 100-120 vehicles equipped with Euro 6 engines, hybrid and electric. Among other projects that will be realised in the city of Krakow, it is worth mentioning the construction of Park & Ride facilities within the integrated territorial investments.

The MZA in Warsaw wants to buy, up to 2020, a total of 130 buses with alternative drive systems (hybrid, gas and electric). They will be kept at the Redutowa Depot which will be the greenest depot in Poland. In addition to the multi-level garage for buses, it will be equipped with electric chargers, solar panels and heat pumps.

The construction of new infrastructure and the purchase of new rolling stock does not guarantee the arrival of new passengers. Therefore, some actions and organisational efforts are needed to favour public transport (bus lanes, priority for tram traffic at intersections, etc.), providing easy access to bus stops and stations, the organisation of comfortable, multi-modal interchanges connected with Park & Ride facilities and cycling infrastructure, as well as comprehensive and interactive passenger information taking into account people with special needs.

Looking at European examples, it seems reasonable not only to carry out activities to promote public transport, but to also introduce disincentives to use private cars – for example, congestion charges, traffic restricted zones, reducing the supply of parking spaces.

For local governments it will also be necessary to carry out actions to change mobility behaviour by providing efficient urban transport, which will reduce the need to use a car or even to possess a private vehicle. For the integration of the transport system in the city it is also important to incorporate urban railway lines (which is already functioning, for example, in Warsaw and Tri-City Agglomeration).

And finally, state authorities are expected to analyse the existing legislation for the introduction of solutions that will enable local governments to introduce a wider range of instruments, such as:

About the Chamber of Urban Transport (IGKM)

In 2016, the Chamber of Urban Transport (IGKM) celebrates 25 years of its existence. The year also marks the 95th anniversary of the Association of Tram Enterprises and Commuter Rail, the first organisation – of which the Chamber is the successor – that integrated public transport sector after the First World War. IGKM gathers 224 members[1], mostly operators and organisers of urban transport, plus manufacturers, service providers and research institutions.

The Chamber’s basic activities include:

IGKM is a member of the International Association of Public Transport (UITP) and cooperates with national organisations of public transport companies in Europe, e.g. VDV in Germany and UTP in France.

Adam Karolak is President of the Chamber of Urban Transport (IGKM) in Poland. He is a graduate from the Institute of Transport, Warsaw University of Technology, specialising in the operation of motor vehicles. In his long professional practice Adam has dealt with technical, legal and organisational problems of local public transport. He participates in the creation and revision of national legislation in the field of public transport, and the adjustment of Polish regulations to the requirements of EU legislation.