In a blog for Intelligent Transport, Graham Ellis looks at how authorities are redesigning the surface transport system in Barcelona as part of the city’s sustainable mobility plan for 2013-2018…

For my first blog of 2016 I am back in Spain, specifically in the city of Barcelona. The reason for my interest is that at the European Transport Conference in Frankfurt, I met with Josep Mension, director- central services and deputy chief officer at Transports Metropolitan de Barcelona (TMB) and Adria Gomila i Civit from Barcelona’s Town Hall to talk about the sustainable mobility plan for 2013-2018 and how this impacts the bus system in the city.

The City Council has decided that the congestion experienced in the city does not match with its sustainable urban mobility plan (SUMP) and that changes have to be made to support increased travel by foot, bicycle and public transport rather than private vehicle. This obviously impacts on the bus operations in the city. However resources are scarce and just throwing extra vehicles into the mix is not an option, nor overall is it affordable, therefore something different had to be proposed.

The centre of the city is laid out in octagonal blocks with both vertical and horizontal passages, as well as several major diagonal roads. This layout seems to encourage free flow of traffic but every octagonal corner attracts unrestrained parking and also “rat running”.  Part of the city’s plan is to make some of these “small” blocks into super blocks which will feature traffic restrictions and pedestrianisation and will force buses onto “main” vertical and horizontal routes.

Josep told me that TMB had been working with various partners to since 2001 to improve the service to citizens but that the SUMP was pushing them further towards final route implementation. In normal bus operations it is usual to find small alterations to routes to account for new housing/shops/workplaces etc. but, large scale changes are rare as they are complex and expensive to institute.  The city already has a fully operational Metro system, supported by a heavy rail infrastructure and six operational tram lines which radiate out from the centre of the city to feed local suburbs but, these are fixed inflexible links that cannot be changed as the city changes. The only flexibility is with the bus service, the last major change the city made was to introduce an integrated fare system in 2001 allowing travel across the city similarly to London and Paris.

TMB partners in the review work are the City Council, “BCN Ecologica” (the Urban Ecology Agency) and the Centre for Innovation in Transport (CENIT) attached to the UPC Barcelona Tech. Initial work concentrated on making more bus lanes to increase running speed and service regularity. During 2004-06 new layout design of the whole network was investigated, between 2005 & ’08 they examined the feasibility of adding traffic light priority without causing excessive impact to private vehicles or pedestrians, several were set-up successfully.

In 2007 TMB introduced two high performance routes along both Diagonal Avenida and Gran Via Corts Catalanes. The first of this type of service in Spain that has previously been used in many European and American cities. In 2009 TMB then moved on to a global review of all routes in the city, the outcome was a set of 11 premium routes, six of these were sea-mountain direction and five were parallel to the coastline. These services were given the name of “RetBus” and in 2011-12 the integration of both sets of routes were examined, from this further review a hybrid model was developed and introduced.

Once these routes were introduced it became necessary to clearly identify them and to arrange suitable interchanges between each type of route, simple identification was used. In the case of horizontal services they were prefixed “H” plus an even number printed in bluer, vertical routes have the prefix “V” and an odd number printed in green with the diagonal routes prefixed “D” and codes 20,30 & 40 in purple.

In order to make the use of these new routes simple new area interchanges were necessary so that passengers could easily change between different services simply and quickly. Originally it was proposed to use the octagonal shape of the city squares but this was found to impede right turning traffic and closeness of adjacent bus stops so a new system had to be derived. The one chosen was to use a 3-block distance between stops which gave approx. 400 metres between adjacent stops. 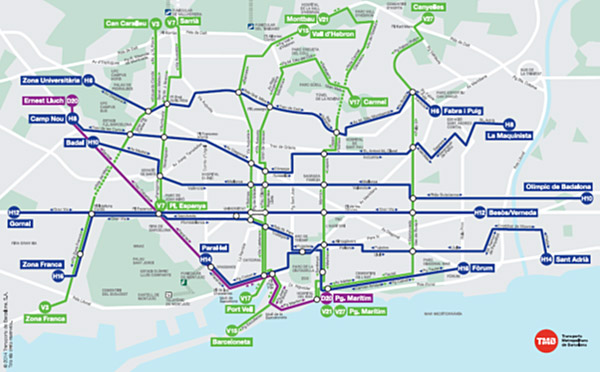 Passengers approved of the changes

With all of these new initiatives introduced some new infrastructure such as new bus lanes had to be added to ensure that bus reliability did not decline. Following the introduction of all three phases of bus modifications a survey of passenger satisfaction was undertaken and overall a high percentage of passengers approved of the changes, in the region of 7/10. In total 15 of 28 planned routes have been introduced but phase four is still on target to take place shortly. Phased introduction was seen as necessary as internal resources were utilised to improve the operating system and with the financial crisis money was restricted, which caused a delay in introduction of changes. 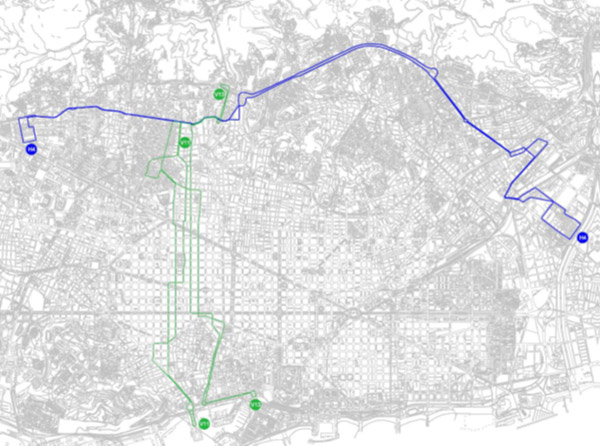 Despite restrictions in funding TMB has continued with its vehicle replacements and has specified a mixture of buses to operate the new and existing routes. The current fleet numbers 539 diesel powered buses, 396 compressed natural; gas buses, 132 Hybrid buses and three full electric ones. The majority of the buses are either standard length single-deckers or articulated versions and in one case a hybrid bi-articulated bus (illustrations shown below). 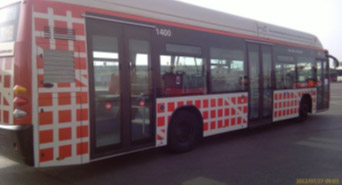 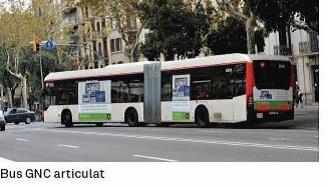 The future is looking bright for Barcelona with a steady progression of route improvements that will continue to provide increased service at controlled cost to the city’s population.

I am indebted to both the European Transport Conference and Josep Mension of TMB for allowing access to all of the relevant data.