In January 2014, an all-electric bus fleet was introduced to a bus route in Milton Keynes. The project is a five-year trial to test whether electric buses can perform on par with their diesel counterparts in a real operational environment with the potential to provide a cost-effective and efficient alternative to traditional diesel and petrol vehicles. The trial is an innovative free- market collaboration, led by eFleet Integrated Services (eFIS). This is an enabling company that was set up by Mitsui & Co. Europe and Arup – the design and engineering consultancy… 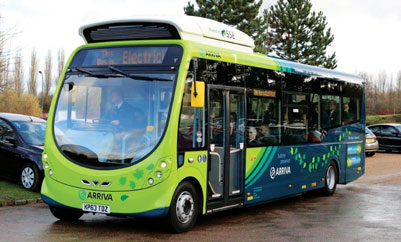 Milton Keynes Borough Council was extremely supportive and keen for Milton Keynes to be the first city in the world to offer a high usage, all-electric fleet bus service. The eight electric buses will operate on the Arriva route 7, that runs up to every 15 minutes, seven days a week from Wolverton in the north of the city, to Bletchley in the south. The route services high-density residential areas as well as connecting the Centre of Milton Keynes and the busy Rail Station. The buses will cover over 56,000 miles per year.

What makes this trial exciting is the fact that the buses are charged wirelessly during the day and only have a full charge overnight. This means that once the buses have left the depot for the start of service, they can remain on the road all day without any need to return to the depot. How is this achieved? Via Inductive Power Transfer (IPT) or more simply, wireless charging.

It is a very simple concept: at each end of the route, at Wolverton and at Bletchley, charging plates have been set into the road. When they reach the end of their route, the driver parks the bus over the plates and the power is directly transferred to receiving plates underneath the vehicle using a technique based on the principles of electrical induction – similar to how an electric toothbrush is charged. This method of charging delivers very high power ratings, (120kw) and is extremely efficient with a transfer of 90% or more which makes it comparable to the plug in charger transfer rates.

The wireless charging is also described as ‘opportunistic charging’ and significantly increases the range of an electric bus and as a result, the battery does not have to be as large if it was only being charged overnight. IPT technology is not new – the principles of electrical induction have been around for many years. Nineteenth century scientists, Faraday and Tesla, both understood that magnetic fields can be used to create a current in a wire and because magnetic fields can be transferred through air, no wires or cables are needed to get the power to where it needs to go.

The wireless charging is very efficient – in just 10 minutes a bus parked over a charging point will replenish up to two-thirds of the energy consumed on the 15-mile bus route. Only two wireless charging points are needed for all eight buses and the charging times are built into the schedule of the timetable so a customer does not see any gap in service and the frequency for the customer is maintained. In fact, the charging time can be used to board passengers, deal with customer enquiries and for the driver to prepare for their next run.

This project has only been possible as a result of the diversity of the companies involved in the collaboration. Each collaborator has played a vital role, some in a very specialised field of expertise, to bring this project to life. The management of the project is the responsibility of the Mitsui-Arup joint venture – MBK Arup Sustainable Projects (MASP).

Wrightbus designed and manufactured the eight electric buses using their Streetlite model with the IPT equipment incorporated. The manufacturer will provide all warranty, maintenance and technical support for the buses and will work closely with Arriva over the life of the project. The bus is 9.4m-long and has a seating capacity of 37 with an additional standing capacity of nine. There was no single pilot vehicle for this project: the eight vehicles are the pilots and are going to be vital in seeing how an electric vehicle performs on a heavy-duty commercial bus service.

The trial is unique and Arriva were keen to be involved in such a demanding project in a city where buses work harder than in other urban areas. Milton Keynes is a city designed for the car but buses are playing an increasingly important role in offering good links to the centre, locations of high employment and linking the residential areas to key locations like the hospital and the train station.

There are other electric buses in the world but there is nothing being operated on the scale of the Milton Keynes project and this is why it is so exciting. Probably, the closest example is the Linea Star electric bus route in Turin. The Turin project also uses the wireless charging method but the route is far shorter and the overall service is far less demanding than route 7 in Milton Keynes.

An enormous amount of data will be collected throughout the project: from the buses, the charging points, the remote data system on the vehicles, air quality statistics, passenger and driver feedback, and much more. All the data is being collated and analysed by the University of Cambridge who will provide the management information to the project and collaborators.

Arriva are leasing the vehicles from eFIS. A dedicated team of drivers has been assigned to the route and extensive training was given before the buses were introduced. Drivers are responsible for putting the buses on-charge at the end of the working day. The initial feedback from drivers is extremely positive with the buses giving a comfortable and quiet drive with no loss of speed or acceleration.

The buses are housed overnight in grounds away from the main depot. This allowed an area to be dedicated to the electric bus fleet and to enable eight charging points to be installed.

No project of this magnitude will be without teething troubles and the occasional maintenance or technical issue so to prevent any disruption to the service for customers, Arriva have maintained a shadow fleet of diesel buses. This ensures that if an electric bus is off the road for any reason, a diesel bus slots into its place so the service is maintained seamlessly and at the scheduled frequency.

So what do customers think? Well, the interest and enthusiasm in the run-up to the buses being introduced was very high and the people of Milton Keynes were excited to see the buses being launched. Those that have used the buses have been impressed with how quiet they are, commenting that this adds to the comfort of the overall journey experience. However, the whole point is that customers shouldn’t notice any difference; they want to get on a bus at a specific time and they want it to take them to their destination. The whole idea of this project is to demonstrate that the electric bus can do everything a diesel bus can do and with over 800,000 passenger journeys a year, customer feedback will play in important role in analysing the success of the buses.

The environmental benefits of the trial are extremely important and the buses will remove five tonnes of particulates and noxious tailpipe emissions from Milton Keynes’s streets each year. Approximately 270 tonnes of CO2 will be removed from the earth’s atmosphere, and these are significant figures. As the supply of electricity for the UK’s grid becomes greener, in future years, the CO2 savings could increase to more than 680 tonnes.

Electric buses are not new for Arriva. In 2009, Arriva was the first to introduce electric buses to Denmark and the company now operates 11 mini-buses in Copenhagen. It also runs a small network of electric buses in Den Bosch in the Netherlands and on the island of Schiermonnikoog.

We have a wide range of experience with biofuels and work with contracting bodies, where local governments are supportive, to test and introduce alternative fuels and traction technologies.

Arriva’s environmental experience includes buses powered by compressed natural gas (CNG), liquefied petroleum gas (LPG) and biogas on routes throughout Europe. Across its operations DB Arriva also invests in technology such as solar panels and wind turbines to generate power. It is also currently involved in BB Green – an innovative pilot to create a future type of fast ferry for use in several European cities.

In London, DB Arriva has led the way with hybrid technology winning an award for establishing one of the largest hybrid fleets in the capital. It was also selected by Transport for London as the partner of choice to introduce the New Bus for London – a prototype hybrid bus built specifically for use in the city.

The trial will answer questions that can only be answered by buses being in operation on a daily basis and we are excited about the five-year project and what it will demonstrate.

Maq Alibhai is Head of Service Delivery for Arriva the Shires Ltd and is responsible for seven depots across Hertfordshire, Bedfordshire and Buckinghamshire. Maq has been responsible for the Arriva element of the electric bus project and enabled it to happen from an operational angle. With experience as both a Depot Manager and General Manager, Maq’s responsibility is to ensure high level service and delivery across all elements of providing bus services in major towns such as Milton Keynes and Luton.