Dr Martin Kagerbauer and Christian Klinkhardt explain the thinking behind the new autonomous bus trial underway in Germany and explain what the next steps for the project are. 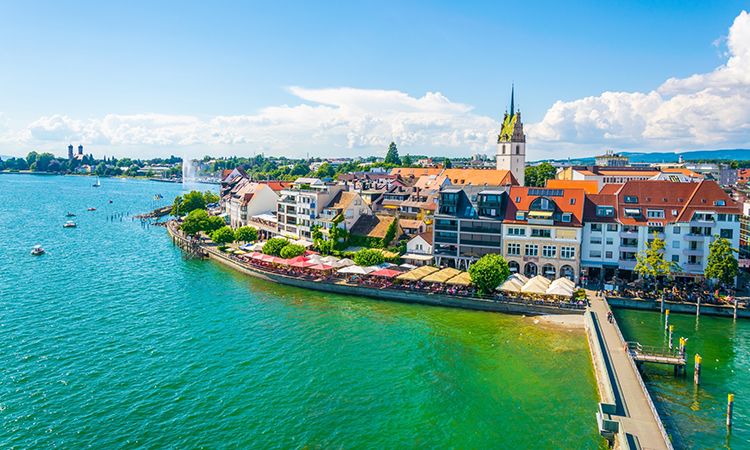 Friedrichshafen will play host to the autonomous shuttles along with Mannheim

Since they can be used flexibly and cost-effectively, autonomous buses enable operators to expand their existing public transportation service and adapt it to demand. Particularly in areas and times of low demand, great potential is expected. These are, for example, rural areas, outlying areas of cities, and the connection of residential neighbourhoods to the main transportation network.

In addition, gaps in the existing public transportation supply can be closed by tangential connections. Times of low demand are nights, early mornings or weekends. Several modes of operation seem feasible, which vary in terms of flexibility and intention of usage of the minibuses (see Figure 1).

One can distinguish between a scheduled and timetabled service, an on-demand service (temporal and/or spatial), and usage as main mode or serving the ‘first’ or ‘last mile’. However, the core problems of the economical operation of this technology, so far, are the vehicles’ low speeds and the need for an assistant in the shuttle. 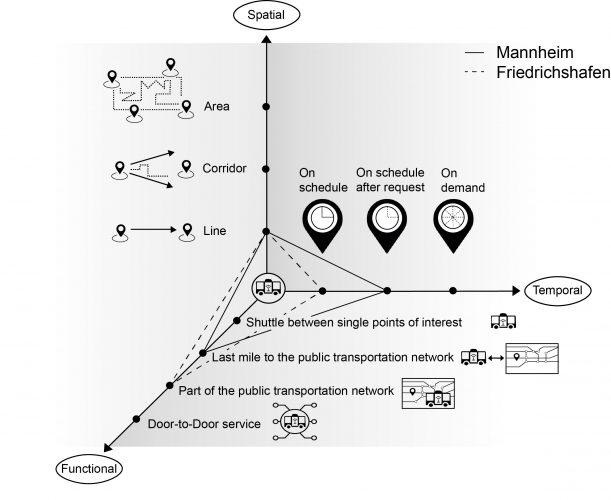 Figure 1: Distinction between operation modes of autonomous minibuses and their use in the living labs

RABus is the abbreviation for ‘Living Lab for an Automated Bus Service Operating as Part of Public Transportation in Rural and Urban Areas’. The project, which has so far received seven million euros in funding by the state of Baden-Württemberg, consists of two living labs in southwestern Germany. These are the Franklin district of Mannheim and the city of Friedrichshafen. Autonomous driving up to Level-4 as defined by the Society of Automotive Engineers (SAE), will be realised, with up to five Group Rapid Transit (GRT) shuttles delivered by the company 2getthere, a subsidiary of ZF Friedrichshafen AG (see Figure 2).

A core objective of the living labs is to operate in everyday mixed traffic at feasible velocities, meaning the vehicles do not affect traffic flow and offer attractive travel times for passengers. The targeted speeds of up to 40km/h in urban areas and up to 70km/h in rural areas, mark milestones in the development of autonomous shuttles as part of public transportation.

Within the project, the implementation of autonomous bus services will be evaluated from a technical, operational, legal and economic point of view. Furthermore, the traffic impact and passenger acceptance of the autonomous shuttles will be analysed through surveys. The transferability to other regions will be examined and recommendations for the future integration of autonomous shuttles in public transportation will be developed. Since legal issues are still obstacles for the realisation of the project, the approving authorities will be involved at an early stage.

Another essential component of the project are public relations activities. ‘Citizens events’ will be held in both living labs to enter into a dialog with the inhabitants of the living labs. The goal is to present the project, explain the technical background and address concerns to prevent negative attitudes towards autonomous shuttles.

Six partners are working on the RABus project under the coordination of the Research Institute of Automotive Engineering and Vehicle Engines Stuttgart (FKFS). These are the local public transportation operators Stadtverkehr Friedrichshafen GmbH (SVF) and DB ZugBus Regionalverkehr Alb-Bodensee GmbH (RAB) in Friedrichshafen and the Rhein-Neckar-Verkehr GmbH (RNV) in Mannheim. ZF Friedrichshafen AG (ZF) is taking care of the delivery and testing of the vehicles, while the Institute for Transport Studies (IfV) at the Karlsruhe Institute of Technology (KIT) will examine user acceptance and traffic and travel demand impacts. This composition of different stakeholders allows the project to consider the challenges from various perspectives. 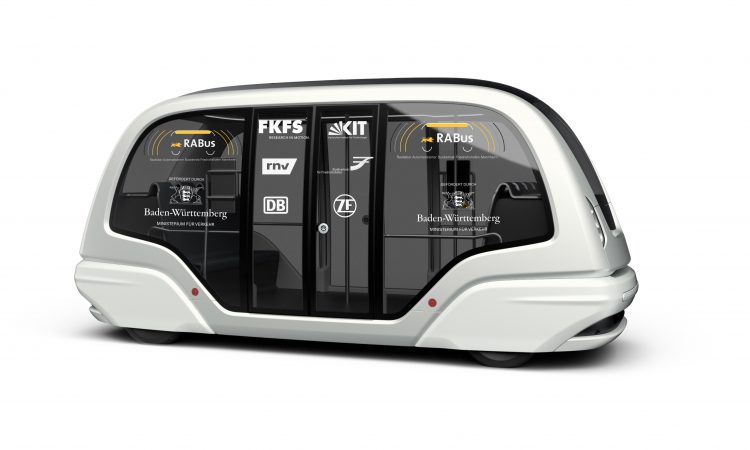 In Friedrichshafen, up to three GRT shuttles will be deployed as part of the project, running in scheduled service initially on an urban route and in a later phase, over a 6km track including rural areas. The minibuses will operate in mixed traffic on both urban and rural parts of the route, each with space for up to 22 passengers.

To achieve the speeds necessary to float along in traffic and provide attractive travel times, the vehicles and the associated systems are being continuously developed. Particularly in rural areas, there will be high speed differences between oncoming traffic and the shuttles, which will require the autonomous minibuses to quickly detect their surroundings and react.

In Mannheim, two GRT shuttles will run according to a schedule at first, with a change to a time-flexible service (on-demand) during the course of the project. This will provide the opportunity to examine acceptance of the different operation modes. The minibuses will act as a feeder to a station of a light rail line. As a result, the newly developed residential area on the former site of a US Army base is to be made accessible by public transportation.

Due to the speed limits in the residential area, a maximum of 30km/h will be the target. A further goal for the Mannheim living lab is the intended operation in mixed traffic without an assistant within the vehicle. Towards the end of the RABus project, it is planned that the shuttles will operate under the remote supervision of a control centre only.

To ensure the success of the autonomous shuttles, it is crucial to ensure public acceptance. To investigate acceptance, KIT will conduct various surveys before, and during, the operation of the vehicles. For example, an online survey conducted throughout Baden-Württemberg will provide information about travel behaviour in connection with autonomous shuttles in general.

In addition, so-called stated-choice questions will be used, in which respondents will be placed in a hypothetical situation in which autonomous shuttles are available to them as an alternative to the familiar modes of transportation. This makes it possible to determine realistically which modes the respondents would choose in different situations.

Further questionnaires will be conducted in the living labs after the implementation of the bus service. One focus will be on passenger perception of safety, given the significantly increased speeds of the vehicles compared to other projects. The results of these surveys will provide very reliable information, invaluable to RABus as it offers respondents, for the first time, an attractive service both in terms of the number and speeds of vehicles.

In order to evaluate the benefits of further expansion of autonomous shuttles, traffic and travel demand impact need to be quantified. How many people will be transported? How much congestion can be avoided? How many CO2 emissions can be prevented?

To answer such questions, the team at KIT will create two travel demand models for the two living labs. Using the software mobiTopp, which is developed by the institute, every activity and trip made by the entire population of the two areas will be simulated over the course of an entire week. These simulations will be based on structural data of the region, as well as data on people’s travel behaviour.

Various operational modes of autonomous shuttles will be investigated in different scenarios and the resulting traffic and travel demand impacts will be compared. Based on the results of the two travel demand models, a Baden-Württemberg-wide model will be built to estimate the potential of the operational modes of autonomous shuttles in different types of regions.

The RABus project represents a great chance for the further development of public transportation. The findings generated in the living labs can be transferred to other regions and thus enable the development of a tailored, attractive and economical service of autonomous shuttles in different regions. In RABus, speeds are targeted that approach the real speeds of conventional vehicles. The resulting travel times will lead to realistic data on user acceptance, allowing the examination of the overall traffic and travel demand impacts of automated shuttles.

Achieving the targeted speeds in Friedrichshafen, and operating without an attendant in the vehicle in Mannheim, represent milestones in the further development of autonomous shuttles and public transportation.

His research areas are travel surveys, analyses of travel behaviour and multi-agent travel demand modelling as well as mobility services and new kinds of mobility.

Christian Klinkhardt is a research assistant at the Institute for Transport Studies at Karlsruhe Institute of Technology (KIT). A graduate in civil engineering, his research focuses on travel behaviour and multi-agent travel demand models.