The e-bikes can now be hired and dropped off at over 95 existing points in the Just Eat Cycles scheme network which are already home to 500 pedal bikes. 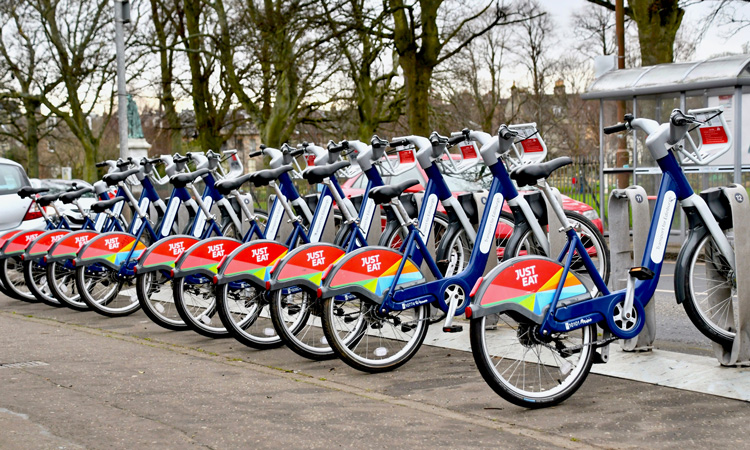 A new fleet of rentable e-bikes has been launched in Edinburgh which will reportedly see the Scottish capital create the UK’s largest fleet of docked electrically powered bicycles.

The new fleet of 168 e-bikes was officially launched by Transport for Edinburgh and the scheme’s operator, Serco. Edinburgh’s e-bikes will be phased into the city’s existing cycle hire scheme – Just Eat Cycles.

Each full charge provides a range of 50 miles and provides a constant electric assist while users pedal. Serco monitors bike power levels using real-time technology and replaces batteries when they are running low.

Alex Macdonald, General Manager of Just Eat Cycles, said: “We’re proud to launch our fleet of 168 e-bikes and introduce the new service to this brilliant city. Those who live, work, study and visit Edinburgh now have access to a fleet of e-bikes which will grow to become the UK’s largest docked e-bike fleet. We look forward to seeing people enjoying the e-bikes, and choosing them as a sustainable and affordable alternative mode of public transport.”

George Lowder, Chief Executive of Transport for Edinburgh, added: “The e-bikes are great fun and make cycling around the city comparatively easy. The really innovative thing is the way in which they are completely integrated into the existing scheme.”

“E-bikes are growing in popularity across Scotland and provide a fantastic low carbon transport option which promotes sustainable and active travel. The addition of e-bikes to the public hire scheme in Edinburgh increases their accessibility for local residents and visitors alike, which can only be viewed as progress. The eBike Grant Fund, delivered by Energy Saving Trust and funded by Transport Scotland, awarded Transport for Edinburgh £238,144 towards supporting 63 e-bikes and associated charging infrastructure which will be made available through the Just Eat Cycles hire scheme,” said Ellie Grebenik, Senior Programme Manager at Energy Saving Trust.

The average trip length on the scheme’s existing pedal bikes is 16 minutes. Serco anticipates that e-bike journeys will be far shorter given the greater distances which can be covered in the same time.

Following the additions to the scheme, users with a 24 hour pass or annual pass will continue to be able to make multiple trips across the city a day and will be able to choose whether to use a pedal bike or pay extra for an e-bike, depending on each individual journey.