On 12 December, 2012, His Majesty the King of Morocco, Mohammed VI, inaugurated the Casablanca tramway. 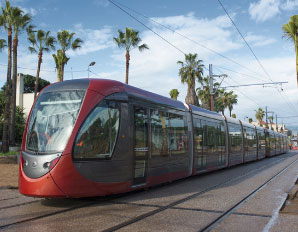 In 2009, Casa Transports – a public company in charge of Casablanca’s public transport – awarded a contract to Alstom for the supply of 74 Citadis trams. In 2010, Casa Transports awarded Alstom two additional contracts for the installation of the line’s rail signalling and power supply systems.

This 31-km line, the longest line ever to be built in one project, links Casablanca’s East and South-West districts via the city centre, and calls at 48 stations. The Citadis trams are 65 metre-long double units and can accommodate up to 606 passengers. They will carry up to 250,000 passengers daily. With its 12 side doors and its full low-floor concept, the Casablanca Citadis will provide easy access for everyone and make for a smooth flow of passengers. The design of Citadis was customised in order to achieve perfect integration into Casablanca’s architecture. Its modern exterior appearance features a harmonious, rounded shape end-to-end. Its metallic orange colour provides a contrast to the city’s brightness. The interior features Moroccan style motifs and colours. The air-conditioning, large tinted bay windows, wide aisles and information displays in French and Arabic were designed to provide optimal travel conditions.

Service will be provided from 5:30 a.m. to 11:30 p.m. at intervals of 4 minutes 45 seconds during peak hours and 8 minutes 30 seconds during off-peak hours. The planned transit time for the line running from Ennassim to Facultés is 63 minutes 30 seconds, and 69 minutes from Ennassim to Hay Hassani. Once technical adjustments are completed, traffic signals ensured and full compliance of the tram platform guaranteed, the average speed will reach 18.8 km per hour with a 75% priority rate at intersections.

The signalling system supplied and installed by Alstom ensures safety at line intersections. It also manages road crossings and gives the tramway priority, for a higher speed and greater safety.

Casa Tram, a group headed by RATP Dev in partnership with the Moroccan Deposit and Management Fund (Caisse de Dépôt et de Gestion) and the holding company, Transinvest, is responsible for operating and maintaining the line for a period of five years. Casa Tram outsourced the contract to Alstom in July 2012 for maintenance of the fleet and infrastructure.

Forty or so Alstom employees will carry out preventive and corrective maintenance operations on the trams on a day-to-day basis, as well as performing their interior and exterior cleaning at a brand new 13,800-m² facility located in Casablanca.

RATP Dev has drawn up the timetable and operating procedures, regulations and maintenance policy. It has carried out all the technical operating tests and managed the installation of fixed equipment, energy supply equipment, signalling systems and rolling stock.

Traffic management will be provided by the Central Command Post (PCC) located in Sidi Moumen at the eastern end of the line. This seven-hectare operations and maintenance centre is one of the largest in the world.

Casablanca’s Citadis tramways were manufactured and assembled in France at the Reichshoffen plant. Other facilities involved in the project were La Rochelle (engineering), Le Creusot (bogies), Ornans (motors), Villeurbanne (onboard electronics) and Tarbes (traction system).

To date, 1,600 Citadis tramways have been ordered by 40 cities worldwide. In all, Citadis has run over 400 million kilometres and carried about 4.8 billion travellers (2 million per day).