The launch is part of the agency’s plan to enhance and modernise the bus fleet with zero-emissions technology that aims to deliver environmental benefits for New York residents. 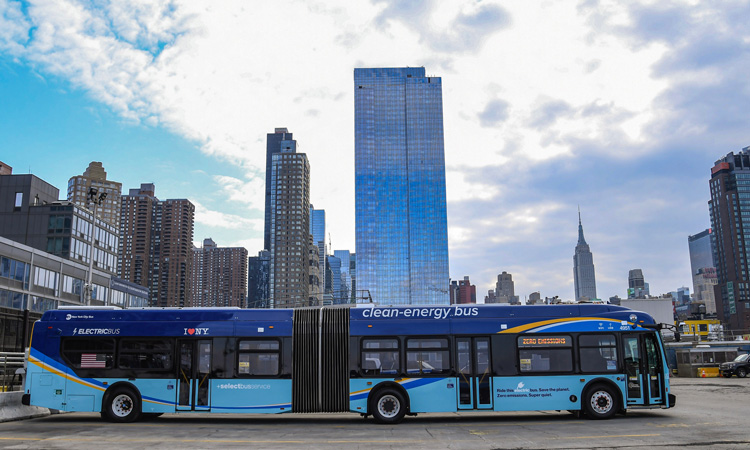 MTA New York City Transit has deployed the first of its new all-electric articulated bus fleet on one of the city’s busiest crosstown routes – the 14th Street busway.

The all-electric articulated bus is said to represent the first of approximately 500 electric buses that will be purchased as part of the 2020-2024 Capital Plan and will serve all five boroughs. New York City Transit also released new data showing the growing popularity and success of the M14 Select Bus Service and the 14th Street busway.

“We are committed to a state-of-the-art bus fleet across the entire city that is green and sustainable, and that means moving toward all-electric technology,” said NYC Transit President, Andy Byford. “Our Fast Forward plan provides a blueprint on how we can work with vendors and other stakeholders to achieve that goal in all five boroughs. We’re also thrilled about the popularity of the M14 and the busway that’s helping to enable its success.”

“Our first all-electric articulated fleet represents the future of MTA bus service and I’m excited for our customers to see and experience the difference,” said Craig Cipriano, Acting President of MTA Bus Company and Senior Vice President of NYC Transit’s Department of Buses. “This is a historic day for MTA buses and the start of our journey to a zero-emissions fleet that will set the standard for the rest of the nation as its largest public bus system.”

The 2020-2024 Capital Plan aims to accelerate the transition to a fleet composed fully of zero-emissions electric buses. The MTA plans to invest $1.1 billion to modify depots for electric bus operations, and to purchase 500 electric buses, including replacement buses and some additional buses. The programme enables the MTA to acquire only electric buses beginning in 2029.

MTA New York City Transit also released new data showing that customers are increasingly choosing the M14 SBS, even during hours when service is running at peak frequency, in an example of a bus line serving as a comparably fast and convenient alternative to a parallel subway line.

“We applaud the MTA for starting its bus electrification process,” said Julie Tighe, President of the New York League of Conservation Voters. “Transportation is the number one source of greenhouse gas emissions and today’s deployment combines three great ways to act on climate and cut air pollution: mass transit, zero emission vehicles and the 14th Street busway. We look forward to seeing electric buses deployed throughout the city, especially in neighbourhoods that have historically borne a disproportionate burden of air pollution.”