Forty new buses are set to be introduced to Malta’s bus fleet as the local operator looks to keep pace with an increase in user numbers. 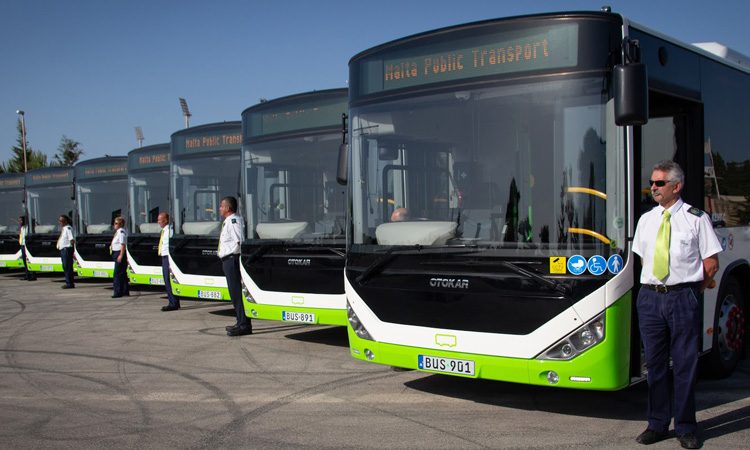 Malta Public Transport, the national operator of the bus service on the Maltese Islands, has expanded its bus fleet by 15 per cent, as the frequency on the islands’ most popular routes is increased to cater for the growing number of people choosing to travel by bus.

The inauguration of 40 new 12-metre Otokar Kent buses was announced by the Minister for Transport, Infrastructure and Capital Projects Ian Borg and Minister for Finance Edward Scicluna, together with Chairman of Malta Public Transport, Felipe Cosmen.

Felipe Cosmen, Malta Public Transport Chairman, said: “While mobility is evolving, public transport remains the most efficient and most eco-friendly way of moving large amounts of people. With this investment, more than half the fleet is less than four years old.”

The company has introduced 250 new buses since it took over the operation in 2015. The new buses provide clean and fully accessible transportation, which Malta Public Transport is confident will play an important part in reducing the country’s collective carbon footprint. The new buses also feature USB charging points and free Wi-Fi, which is available across the whole fleet, while some of the buses were specifically built for airport routes, with larger luggage space.

With a population of less than half a million people, the bus service in Malta has seen massive increases over a number of years with 2018 being a record year with 53.4 million passengers, and the first six months of this year already experiencing an eight per cent increase over the same period of last year.

The Minister for Transport, Infrastructure, and Capital Projects Ian Borg remarked that public transport is very important for Malta, serving as an alternative means of moving from one place to another, and forming part of the holistic plan that the Government put in place in order to address the congestion and traffic issues.

Minister for Transport, Infrastructure and Capital Projects, Ian Borg, explained: “These numbers are showing us that public transport is meeting the people’s demands and therefore it is important that we put more efforts in order to improve efficiency further, for the benefit of the commuters.”

Cosmen welcomed the government’s decision to upgrade the public transport network with new routes and frequencies. This upgrade will offer passengers better connectivity, while increasing capacity on the busiest routes at peak times.

“It is a very interesting time for mobility in general, but particularly here in Malta with its opportunities, factors and characteristics,” continued Cosmen, “it encourages Malta Public Transport to push for more innovation.”

All change at MTA and NYCT