New vertical platform doors have been installed in Barcelona at Can Cuiàs station. This is a first on a subway network and has been being trialled experimentally since May 2019. 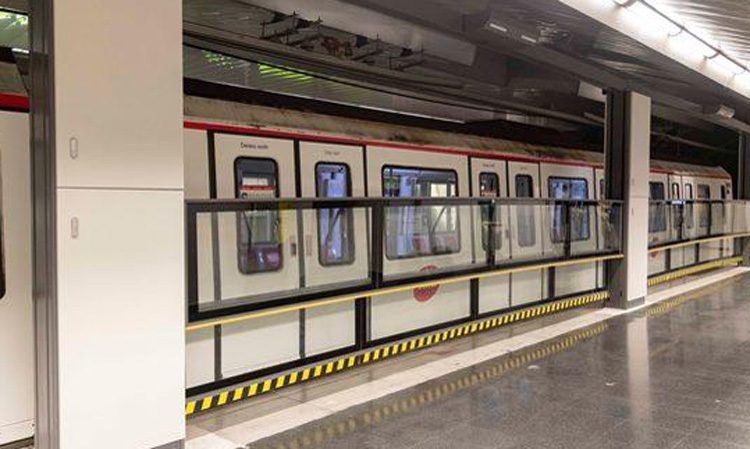 The Barcelona subway has become the first in the world to put into operation, experimentally, a set of vertical platform doors, to increase the safety and comfort of passengers.

The trial is a result of collaboration between the local public operator TMB and a conglomerate of companies and technological institutions in South Korea headed by STraffic. It has been launched on one of the platforms of the Can Cuiàs station, on line 11, located in the metropolitan area of ​​Barcelona.

The vertical platform doors (VPSD) consist of a fixed vertical structure with some guides where two transparent rigid panels slide with a similar operation to a blind: they are deployed downwards to establish a physical barrier of about 160cm in height between the train and the edge of the platform, or fold up to let passengers enter and leave the train. They are designed for automatic drive, and the operation of them is synchronised with the trains.

Compared to horizontal sliding doors, the VPSD’s offer the advantage that they offer much larger areas of passage; they exceed seven meters. Additionally, they have the same dimensions as the space that they fill so they do not add to congestion on the platform. For this reason they are suitable for a wide variety of lines, even those that combine trains of different series, as in some of the subway in Barcelona.

The vertical doors have their own advantages: they are quick and easy to install as they have fewer structural reinforcement requirements. They also are have a lower up-keep cost because they have fewer mechanical elements.

Line 11 was chosen for the pilot because its history is steeped in innovation. It was built and put into service in 2003 as a conventional line, but was subsequently converted into an automatic line. In 2008, the Can Cuiàs station was the first in Catalonia that had automatic doors, almost a year before it was common practise to not have a conductor on the majority of lines in the city.

This new system is expected to benefit the users since the physical separation between the waiting area and the circulation of the trains increases the personal safety, especially with the vast number of people that use the subway.

eBook: The Transport Network of Tomorrow

Building for the future: why hyperloop could revolutionise public transport