Set to carry 650,000 passengers a day upon completion in 2020, the first phase of the Doha Metro Red Line development has opened for preview services. 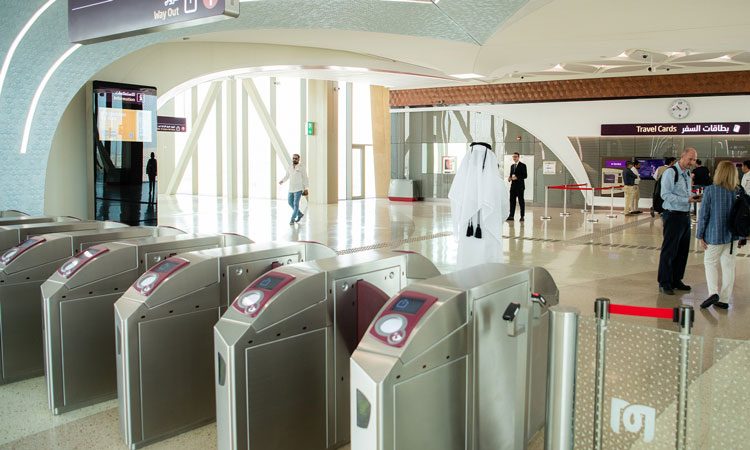 RKH Qitarat, the joint venture consisting of RATP Dev, Keolis and Hamad Group, has opened the first section of the Doha Metro to the public. This follows the award in December 2017 by Qatar Rail of a contract to operate and maintain Qatar’s first urban rail transport network for a period of 20 years. The network includes three automated metro lines in Doha, the Qatari capital, and four tram lines located in the city of Lusail.

The ‘preview service’ of Qatar’s new urban rail system features air-conditioned, trains travelling at 100km/h between stations designed to mirror traditional tents and marks a major milestone in the development of the infrastructure of the country in time for the FIFA World Cup in 2022.

The Doha Metro will be completely automated and driverless, incorporating three lines (Red, Green and Gold), 75km of track and 37 stations. It will be equipped with communication-based train control (CBTC) technology – a control system based on Wi-Fi communication between vehicles and computers controlling traffic. The metro network, which is expected to be completed by 2020, will carry 650,000 passengers per day.

The Doha Metro is already notable among major international infrastructure projects for launching ahead of schedule and within budget while maintaining an impressive safety record, with work on its Green Line alone at one point showing a log of six million man-hours without time lost to injury.

With over three-quarters of its contracts awarded to local companies, the project can also justifiably claim to have contributed to Qatar’s economic buoyancy, while delivering a major part of the National Vision 2030 led by the Emir.

Eng. Abdulla Saif Al Sulaiti, Chief of Service Delivery at Qatar Rail, said: “The preview service is a testament to the tremendous efforts carried out by Qatar Rail’s executive teams and board of directors, as well as the continuous support of His Excellency the Prime Minister and the Minister of Interior, Sheikh Abdullah bin Nasser bin Khalifa Al Thani. The outcome of the preview service is essential for us, and we will build on these as we prepare for the full opening of the network by 2020.”

Ajlan Eid Al Enazi, Chief of Strategies and Business Development at Qatar Rail, said: “Doha Metro is considered one of the key pillars of Qatar’s new integrated transport system. We invite everyone to share with us their experience of the metro during this phase so that we can review build on the factors and develop solutions to enhance the passenger experience.”

The preview service comprises a section of the coastal Red Line scheduled to open weekdays between 08:00 and 23:00 with trains every six minutes, closing at weekends for work to continue.

The full network is set to open in 2020, including the Al Hamad airport branch line and the Gold, Green and eventually Blue Line, connecting other major destinations including five World Cup stadiums, Education City and historic sites. Smart integration with local transport services is intended to further reduce car use in the crowded city.

This efficient, clean, and convenient public-transport system will help reflect the sustainable development and environmental credentials in the run-up to the World Cup.

Developing public transport is one of the key priorities of ‘Qatar Vision 2030’, the strategic plan established in 2008, which has served the government as a road map for the state’s economic, social and environmental development. The Emir of Qatar has strong development ambitions and seeks to become a global reference for smart cities. After significantly developing its road infrastructure, the state has made major investments in urban mobility and public transport to reduce serious congestion on its major roads.