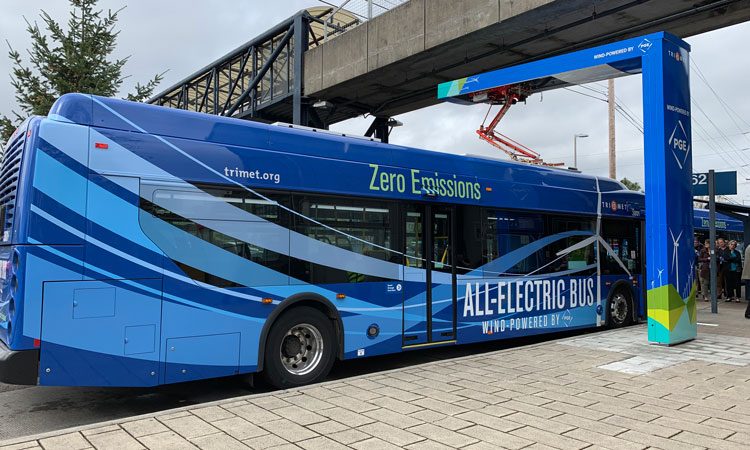 With clean energy and alternative power sitting atop the agendas of transport providers the world over, TriMet in Portland has partnered with Portland General Electric to power its battery-electric buses entirely with wind energy.

Oregon’s largest transport provider is only just beginning its transition to a non-diesel fleet – a goal it has pledged to meet by 2040 – but has started in a way that few others have. In a statement, TriMet said it believes this is a “transit industry first in the United States”.

The operator will launch its first all-electric bus this week, though tests have been ongoing since March 2019. This will then be joined by another four all-electric buses – all New Flyer Xcelsior CHARGE models – which will all be powered exclusively by energy from Portland General Electric’s ‘Clean Wind’ programme.

Commenting on the partnership, Doug Kelsey, General Manager at TriMet, said: “Today, we are riding the winds of change. TriMet’s commitment to a zero-emissions bus fleet by 2040 and support of wind power put the agency and our region at the forefront of a cleaner future.”

Meanwhile, Portland General Electric’s President and CEO, Maria Pope, said: “We are proud to support TriMet’s work to electrify transportation across our region. Powered by wind, this all-electric bus line is a sustainable transportation option for the community and another step closer to a clean energy future for Oregon.”

TriMet anticipates that its first electric buses will reduce greenhouse gas emissions by as much as 140 tonnes compared to a 40-foot diesel bus.

This first foray into zero-emissions public transport will act as a testbed for TriMet’s complete transition to an entirely clean bus fleet. In a statement, the operators says it will “put the electric buses through real-world testing in hilly terrains and local traffic conditions”. It will also be evaluating the buses’ performance, cost and reliability so that it can better determine whether to “accelerate our transition, slow it down or increase testing of other technologies and alternatives, including potentially hydrogen and renewable natural gas”.

Brendan Finn, Transportation Policy Advisor to Oregon Governor, Kate Brown, believes that emissions-free transit is crucial, describing it as the “best strategy to address greenhouse gas emissions from the transportation sector that are contributing to climate change”.