The vehicle requires 80 per cent less energy than an equivalently-sized diesel bus, and will be tested at Nanyang Technological University, Singapore. 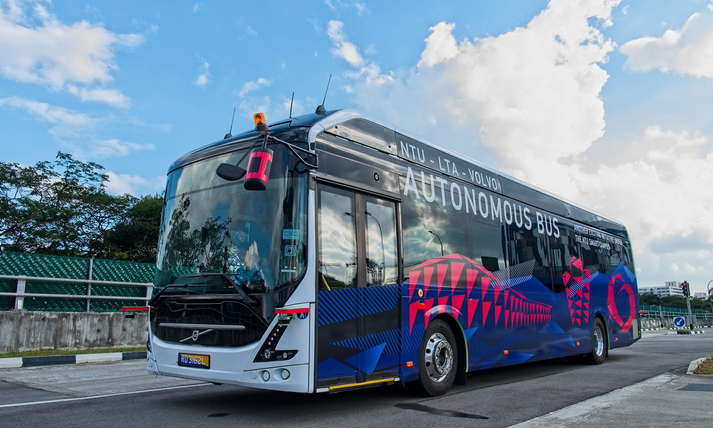 The single-deck Volvo 7900 Electric bus is 12m long and has a capacity of 85 passengers.

This is a key milestone in NTU and Volvo’s development programme – under the university’s partnership with the Land Transport Authority (LTA) – to develop and conduct autonomous vehicle bus trials for fixed route and scheduled services.

The Volvo 7900 Electric bus is equipped with numerous sensors and navigation controls managed by a comprehensive artificial intelligence (AI) system. Ensuring safety and reliability, the AI system is protected with cyber-security measures to prevent cyber intrusions.

The Volvo bus is the first of two that has undergone preliminary rounds of rigorous testing at the Centre of Excellence for Testing and Research of Autonomous vehicles at NTU (CETRAN), where various elements of Singapore’s urban road condition, such as traffic signals, multiple bus stops and pedestrian crossings, and tropical conditions such as driving through heavy rain and partially flooded roads, are replicated.

Plans are in place to test the bus at NTU and subsequently extend the route beyond the NTU campus.

NTU President Professor, Subra Suresh, said: “This fully autonomous electric bus will play a role in shaping the future of public transportation that is safe, efficient, reliable and comfortable for all commuters. It will soon be tested on the NTU Smart Campus, which has been home to a number of innovations as a living testbed for technologies.

“This research project not only involves cutting-edge science, technology and AI, but is an example of close partnership among academia, industry and government agencies in translating basic research into products and services for the benefit of Singapore and beyond.”

Håkan Agnevall, President Volvo Buses, said: “We are very proud to be showcasing our electric bus featuring autonomous driving technology. It represents a key milestone for the industry and is an important step towards our vision for a cleaner, safer and smarter city. The journey towards full autonomy is undoubtedly a complex one and our valued partnership with the NTU and LTA is critical in realising this vision, as is our commitment to applying a safety-first approach.”

The bus comes with a Volvo Autonomous Research Platform software that is connected to key controls such as its navigation system, as well as multiple sensors. This includes light detection and ranging sensors (LIDARS), stereo-vision cameras that capture images in 3D, and an advanced global navigation satellite system that uses real-time kinematics. This uses multiple data sources to give pin-point location accuracy of up to one centimetre.

Lam Wee Shann, Chief Innovation and Technology Officer, Land Transport Authority, said: “The launch of the autonomous bus for on-road trials marks an important milestone in the joint project between LTA and NTU Singapore to develop autonomous buses for fixed routes and scheduled services. It is in line with Singapore’s vision of deploying autonomous vehicles to improve accessibility and connectivity for commuters. We will continue to work closely with NTU to facilitate the safe and robust testing of the autonomous vehicles.”

The system is also linked with an ‘inertial management unit’, which acts like a two-in-one gyroscope and accelerometer, measuring the lateral and angular rate of the bus. This will improve its navigation when going over uneven terrain and around sharp bends, ensuring a smoother ride.

As part of the public trials, Singapore’s public transport operator SMRT will play a key role in determining the roadworthiness of autonomous vehicles on public roads.

While plans are in place to test the first bus on the NTU campus, a second autonomous 12m Volvo 7900 Electric bus will undergo tests at a bus depot managed by SMRT.

Another partner, ABB, will develop a smart fast-charging solution. Offering a charge power of 300kW via a pantograph mounted on the infrastructure, the fast chargers will recharge a battery in three to six minutes. This will enable charging during the layover times at the end of the bus route, without impacting normal operations.