Elon Musk’s system, which he calls ‘loop’, could eventually work on a larger scale beneath cities across the globe; reducing road congestion and pollution. 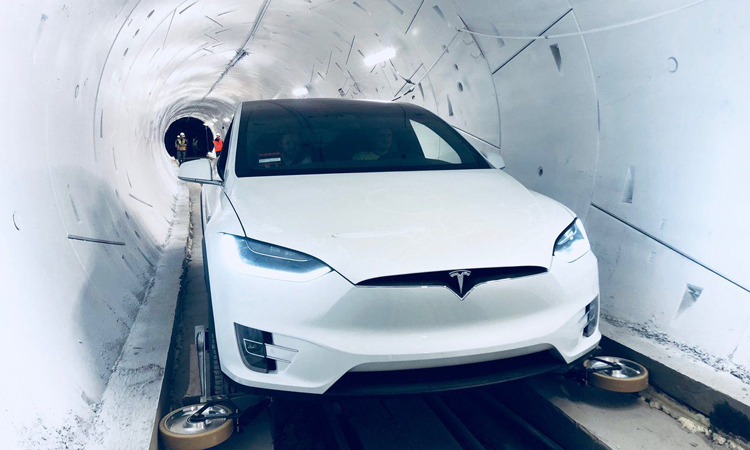 Elon Musk has revealed his underground transportation tunnel, offering members of the press and invited guests to experience travelling in the subterranean tube.

The transportation concept comprises of electric, autonomous vehicles – that bear an extra set of wheels – moving through thin tunnels at speeds of up to 150mph. These tunnels are accessed by lifts that drop 45-feet down from street level.

The test tunnel revealed, named Hawthorne Test Tunnel, is 1.14-mile long, cost $10 million to build, runs underneath streets of Los Angeles and arrives at what is known as O’Leary Station on the tunnel network.

Although the test runs are not yet operating at 150mph, a journey of just over a mile took only three minutes – the same amount of time it took to drive out of a garage and take a right-hand turn onto a surface street in Los Angeles.

The Boring Company’s website states: “The purpose is to demonstrate that a lift can be built in very small footprints and within existing buildings, whether they are houses, office buildings or retail parking lots. Looking forward, one could have a lift in the basement of every office building, allowing extremely convenient commutes.”

Autonomous, electric vehicles could be lowered into the system on wall-less elevators the size of two cars. It is planned that a number of autonomous cars could remain inside the system specifically for pedestrians and bicyclists. Once on the main arteries of the system, every car could run at top speed except when entering and exiting.

For cars to be able to use the tunnels, they would have to be fitted with specially-designed side wheels that move to be perpendicular to regular tires and run along the tunnel’s track. The cost for such wheels would be about $200-$300 per car, however, can be applied to any autonomous, electric vehicle, not just Tesla vehicles.