ViaVan and Berliner Verkehrsbetriebe have launched the on-demand shuttle service ‘BerlKönig’ in Berlin, with an initial fleet of 50 vehicles. 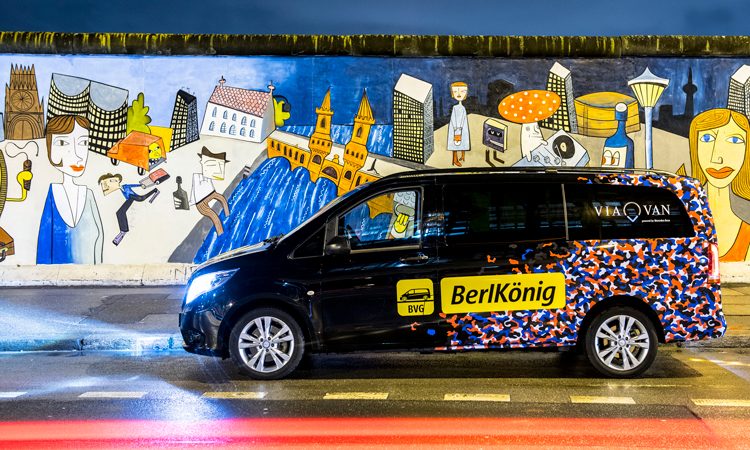 ViaVan, the joint venture between Via and Mercedes-Benz Vans, has announced the launch of its ‘BerlKönig’ ride-sharing service in Berlin, in partnership with the public transit authority, Berliner Verkehrsbetriebe (BVG).

With an initial fleet of 50 vehicles, and plans to expand the service to 300, BerlKönig is currently the largest public sector deployment of an on-demand shuttle service.

“Together, ViaVan and BVG are redefining mobility. We are thrilled to be partnering with BVG on this new project to introduce the ViaVan model of dynamically routed on-demand shared rides to Berlin on a mass scale. The launch of the BerlKönig service is a look at the future of what’s possible in urban mobility when the private and public sector come together,” said Chris Snyder, CEO of ViaVan.

The service will be powered by Via’s technology, which matches multiple passengers aiming for the same direction in a shared shuttle; further reducing emissions and congestion.

“We’ve expanded upon Via’s technology and algorithms to maximise the efficiency of the electric vehicles in our fleet so that we will be able to provide more rides for the citizens of Berlin in an environmentally friendly way,” said Oren Shoval, co-Founder and CTO of Via.

The BerlKönig service will launch with 80 per cent of its fleet fully electric. In addition to all-electric four-seat Mercedes Benz B-Class vehicles, efficient six-passenger Mercedes Benz V-Class vans will be operated. The fleet will also include an accessible option for passengers who require wheelchair assistance.

The partnership complements the existing public transport system in the eastern city-centre of Berlin and is unique in terms of fleet size and scope of the cooperation.

“We are committed to evolving mobility around the globe and this step is a notable moment for public transport solutions that will provide new access for Berliners to explore their city in an affordable, comfortable, flexible and sustainable way,” concluded Snyder.