After a successful trial in Coventry, contactless payments have been implemented on the entire National Express West Midlands bus fleet… 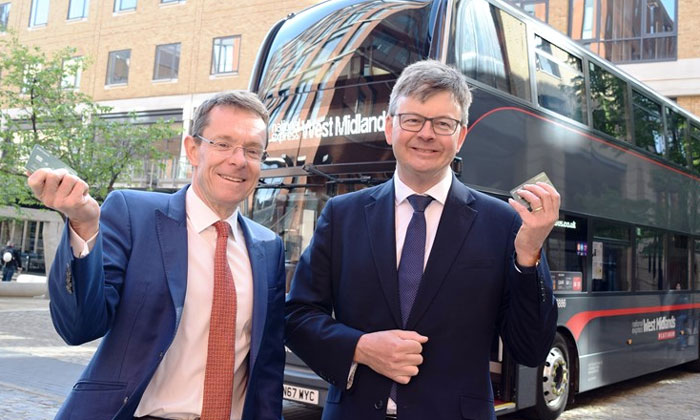 After decades of only accepting exact change, every bus in the National Express West Midlands fleet of 1,600 will accept contactless payment.

Andy Street, Mayor of the West Midlands, said: “One of the things I hear repeatedly from users of public transport is that they want paying for travel to be easier and quicker. The new technology speeds up buses because passengers spend less time buying tickets. They don’t even have to pick up a paper ticket – they just tap their bank card and sit down.

“This saves each customer just a few seconds. But across a long West Midlands bus route with over 100 bus stops, those seconds add up. In cities, the time taken up by passengers getting on a bus makes up between a quarter and a third of the bus’s total journey time. By introducing contactless, National Express West Midlands could speed up bus journey times by up to 10 per cent.”

Councillor Roger Lawrence, Leader of the City of Wolverhampton Council and West Midlands Combined Authority Portfolio Lead for Transport, said: “Building on the success of our Swift card, this step by National Express is a huge one towards a totally contactless system across all forms of public transport. The system adopted can talk to other systems. Transport for the West Midlands is working towards this system, which is similar to the one used in London, improving the experience of users and helping to keep the region moving.”

Tom Stables, Managing Director of National Express West Midlands, said: “Now our customers won’t even have to work out what ticket they need. They can just tap a bank card on the reader and it will work out the fare for them. The first tap pays for one trip. Then, however many more trips you make that day, you will never be charged more than an adult day ticket. It really is that easy – and it’s always the same price as the adult cash fares.

“We know this is what National Express West Midlands customers want. We trialled this system on a few routes in Coventry in February, and just in the first two days, a fifth of adult cash passengers switched to contactless. Since we rolled it out across the West Midlands, we’ve had about 100,000 transactions. We are now getting about 5,000 contactless journeys every day – that’s one every five seconds.”