The Bus Display at InnoTrans 2018 is focusing on the necessary electrification within public transport networks, demonstrating new solutions and bus models… 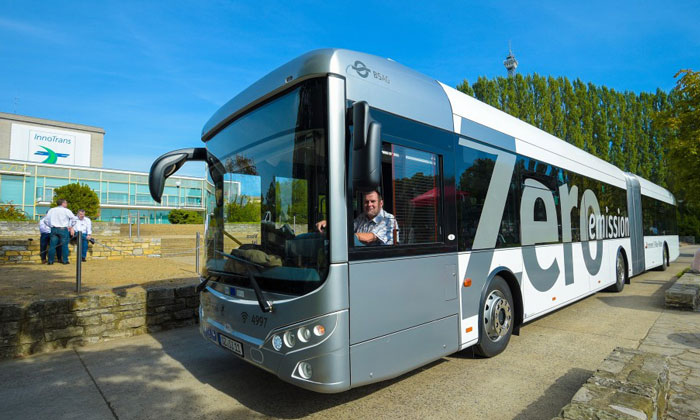 Eco-friendly transport is already established on the rails, but the conversion to electric vehicles is just as necessary on the roads. From 18-21 September the Bus Display at InnoTrans will focus on this particular subject.

Located in ‘Sommergarten’, the Static Display of electric buses will be combined with a 500m long test track for demonstrating the sustainable vehicles and trade visitors at InnoTrans will, this year, be able to familiarise themselves with innovative developments from four new exhibitors at the Bus Display.

Alstom is using the Bus Display to introduce Aptis to the world for the first time. This electric bus has been developed jointly with the Alstom subsidiary NTL and looks very similar to a tram on wheels, with a continuous low floor and four wheels that are steerable, Aptis is very manoeuvrable.

Linkker, the mass producer of electric buses in Finland, is presenting Linkker 12+, which is very energy efficient. With a powerful lithium-titanium oxide battery and short intermediate charging times it has a daily range of up to 350km.

Faiveley Transport, the French component manufacturer, will have a range of products on offer, including auxiliary power converters, air conditioning units and components for the entire power train for buses and rail vehicles.

LogPay Mobility Services, a newcomer to the trade show, is offering trade visitors technical support for selling tickets through mobiles, online and on behalf of employers.

Sileo from Salzgitter, Solaris from Poland and VDL from the Netherlands will again be demonstrating their vehicles. Sileo will be exhibiting its emission-free, bi-articulated bus: the Sileo S25. Solaris is bringing two buses to the Exhibition Grounds: the Trollino 12 trolleybus and the all-electric, battery-powered Urbino 12. Alongside the Bus Display, on the Outdoor Display, the French company, SA Lohr Industrie, is presenting its new i-Cristal public transport system, which can operate in self-driving mode.

The Bus Display is thematically linked with the public transport segment, which covers more than 22,000m², making it the third largest segment at InnoTrans.

The International Bus Forum is responding to the trend for the electrification of public transport on the roads. The subject matter for this new format, which forms part of the InnoTrans Convention, has been put together by the Association of German Transport Companies (VDV).

At the same time visitors can find information at the Dialog Forum about the digital transformation taking place in public rail and bus transport. This discussion will be held at the Palais am Funkturm and is organised by the Association of German Transport Companies (VDV) and the German Transport Forum (DVF).

Contactless payments on Scenic cruises, making it easier than ever before