VIA opens the largest CNG fuelling station in North America 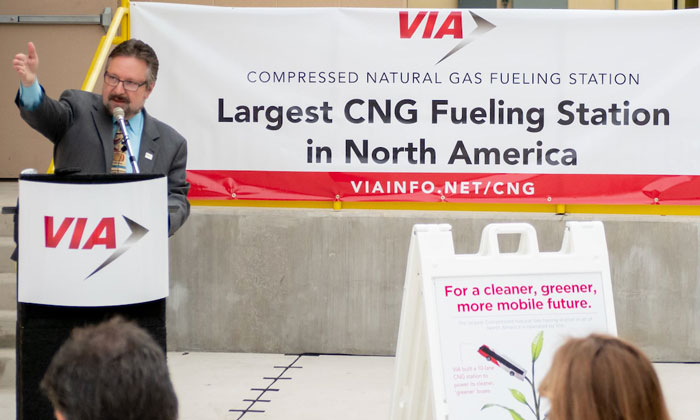 The 10,980 square foot compressor compound is currently the largest in North America.

The 10-lane station began operating in 2017 to support the first of VIA’s new CNG-powered fleet. More than half of VIA’s diesel revenue vehicles have been replaced with CNG buses and a full fleet conversion will be complete by 2025.

Since it began, the station has saved over $1 million in fuel costs. The facility’s ceremony is expected to raise awareness of Ozone Action Season in San Antonio. Installation of the new fuelling station and the expanding number of lower-emissions vehicles will make VIA the largest customer of CPS Energy’s CNG fuel programme.

“The fuelling station services a new generation of VIA buses and highlights our role to drive innovation that improves air quality throughout the region,” VIA President and CEO, Jeffrey C. Arndt said. “Through strategic and community partnerships, VIA’s efforts to ensure a more mobile future include benchmarks for efficiency, substantial fuel savings and infrastructure improvements that come with building a modern transportation system for our region.”

Once the CNG programme is complete, the transformed fleet will bring a 97 per cent reduction of nitrogen oxide and emissions. The annual fuel cost savings are estimated to be $8.5 million and the maintenance savings, over a five-year period, are estimated at $2 million.

The new station includes the addition of 10 CNG dispensers operated by seven 700-horsepower compressors with a flow rate of more than 85 gallons per minute. The existing dispensers – 10 diesel fuel and six propane – will be phased out once the conversion to CNG is complete.