Electric, autonomous shuttles trialled for the first time at a French airport

Groupe ADP, Keolis and Navya are all involved in a pilot project at Roissypôle, where two electric, autonomous shuttles will be trialled… 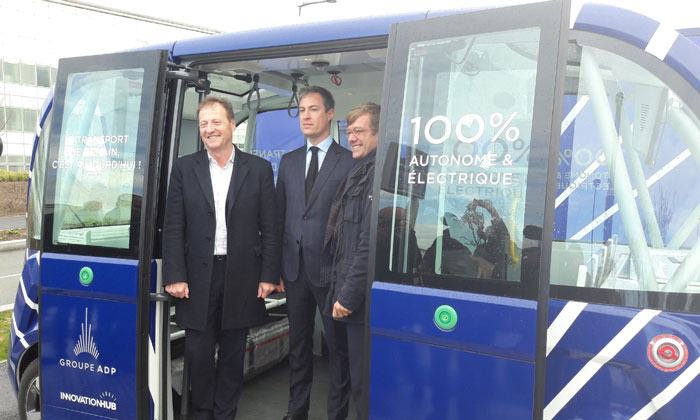 Located at Roissypôle, the shuttles will connect the suburban train station (RER) to the Environmental and Sustainable Development Resource Centre and Groupe ADP’s headquarters.

Keolis has joined forces with Navya, the French autonomous shuttle designer, to carry out the pilot project until July 2018.

“This new autonomous vehicle trial enhances the range of services provided and strengthens our status as a pioneer in autonomous mobility, with more than 90,000 passengers carried on our autonomous shuttles since September 2016,” said Youenn Dupuis, Keolis’ Deputy CEO for Greater Paris.

The route of the two shuttles is unique and aims to test how the automated vehicles will behave on a high-traffic roadway and merge in a dense environment with many pedestrians on foot.

An intelligent road infrastructure system that uses traffic signals to communicate with the shuttles has been set up to optimise the safety factor when crossing the road. Feedback from users will also be used as one of the trial’s determining factors.

This initial step will allow Groupe ADP to subsequently introduce this technology on other sites, within a multifaceted area like the airport city. Expanding onto public roads in Roissypôle could, for example, be considered.

“Autonomous transport services will play a key role in our aim to create a new generation of connected airports. With this first trial, Groupe ADP is paving the way for developing this technology within our networks. In these constrained environments, autonomous technology is a lever for optimising infrastructure for new mobility offers,” said Edward Arkwright, Deputy CEO of Groupe ADP.

The two shuttles are accessible to people with reduced mobility, can carry up to 11 seated and four standing passengers and can reach 25km/h on a 700m long track.

“The airport of the future is based on smart and specially adapted mobility solutions that are able to communicate with the infrastructure we have set up at Roissypôle. Airports are areas where the traffic is extremely concentrated and so it is important to manage and optimise the flow. The aim of this trial is to provide a service that considers future deployments,” stated Navya CEO, Christophe Sapet.