KT’s 45-seat self-driving bus is experiencing test-drives on public roads in Seoul after their application was approved by Ministry of Land, Infrastructure and Transport… 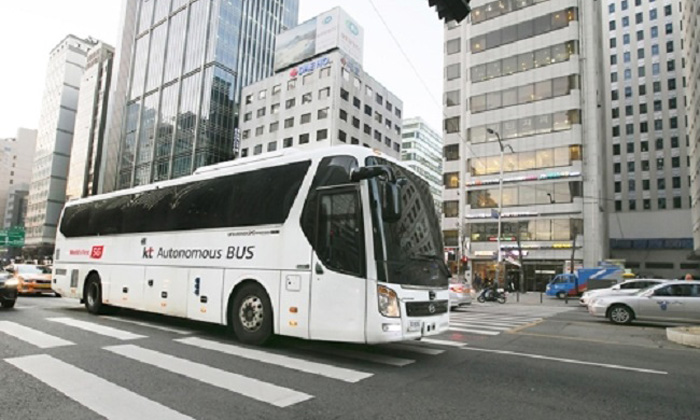 The bus can freely access both highways and city roads in Seoul, and has already successfully completed a four hour test-drive on two major thoroughfares, Gangnam Boulevard and Teheran Road.

The 12m long, 2.5m wide bus incorporates 5G and LTE-based vehicle to everything (V2X) technology that supports the vehicle’s self-driving capabilities. This refers to the passing of information from a vehicle to any entity that may affect it; improving safety and mobility.

Alongside the usual application of sensors and cameras, V2X enhances driving safety by accessing the KT wireless network which supplies high-precision location data. The network also provides the bus with advanced capabilities to detect obstacles in blind spots, calculate distances between stoplights and complete real-time decision-making.

As a result the autonomous bus can travel up to 70km/h, manoeuvre winding paths, engineer turns without difficulty and handle congested areas whilst continually guaranteeing the safety of passengers and pedestrians through its detection technology. The company plans to maintain focus on developing autonomous driving in a convoy, with one bus inches behind the next.

The data gathered from the road tests will be used by KT in their pursuit to implement a fully automated bus service. It is likely the bus will appear on the roads again within the year, this time in Pangyo Zero City, an industrial complex intended to be the capital for South Korea’s technological future.