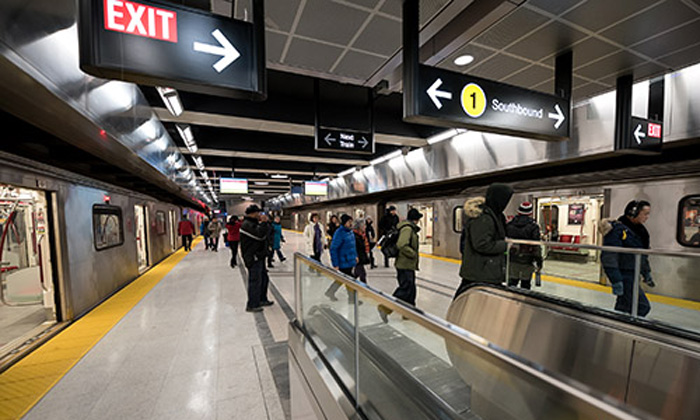 The largest expansion of Toronto’s subway system in nearly 40 years comes into service as transit investments continue across the province. Members of authorities experienced the inaugural ride on the new stretch of Line 1 linking Toronto with Vaughan. This is among the largest subway expansions in North America in recent decades, with six new stations and 8.6km of new track.

The project will allow people to get from the new subway terminus at Vaughan Metropolitan Centre to the Sheppard West Station in approximately 14 minutes and to Union Station in 42 minutes. Students will be able to take rapid transit to York University for the very first time.

“This rapid transit milestone benefits Toronto residents, students and businesses. This opening is another example of all levels of government working together cooperatively to deliver billions of dollars in transit infrastructure and our ongoing commitment to getting Toronto moving,” said John Tory, Mayor of Toronto. “This is the first subway extension we’ve opened in 15 years and we’re determined we won’t be waiting another 15 years to expand the transit system. Beyond this subway extension, we have a transit plan that will make sure we get on with building SmartTrack, the Relief Line, the Scarborough Subway Extension and to expand the City’s LRT network. More transit is a good thing for our city, our province and our country.”

“This is a historic milestone for the Toronto Transit Commission (TTC) with the opening of a critical extension of our subway system, with six new stations featuring Wi-Fi, public art, transit connections, commuter parking, the PRESTO fare system, and new fare gates,” said Josh Colle, Chair of the TTC. “The subway will also be the first time ever that the TTC subway system will cross a municipal border, linking Toronto and York University with York Region with fast and frequent rapid transit.”

The new subway terminus is already helping to encourage business and residential development in Vaughan’s emerging downtown. This hub will help create a walkable, urban community with extensive green space and quick access to transit. The fast connection between Vaughan and Union Station in downtown Toronto will help businesses attract the best talent and boost their productivity, whilst helping families across the region connect quickly and easily.

Expanding rapid transit is part of Ontario’s plan to create fairness and opportunity during this period of rapid economic change. Passengers, and their communities, will experience the benefits from the line expansion whilst sustainability in the cities improves.