Pilots are to take bus riders out of traffic to improve commutes of over 30,000 people, and deliver flexible, environmentally-sustainable transportation… 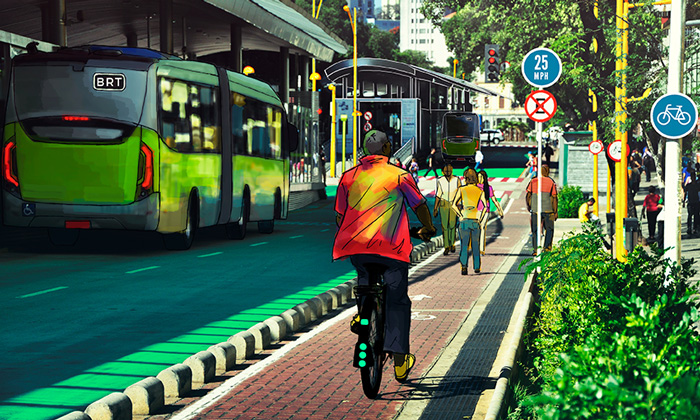 Communities around Greater Boston, in partnership with the Massachusetts Bay Transportation Authority (MBTA), will seek to create faster and more reliable commutes for more than 30,000 bus riders through a sequence of three pilot projects testing bus rapid transit (BRT) features.

The pilots will include a combination of dedicated bus-only lanes that take bus riders out of car congestion, technology to time traffic signals so that buses get more green lights, and platforms that allow riders, including people in wheelchairs or with baby strollers, to ‘level-board’ the bus as quickly as they would a subway.

The projects are an effort of BostonBRT, an initiative spearheaded by the Barr Foundation who declared three $100,000 grants to advance projects in Arlington, Cambridge, Watertown and Everett. The request invited municipalities to partner with the MBTA to demonstrate the potential of BRT in high-ridership, high-traffic areas, with the goal of improving the transit experience. During peak commute times, there are twice as many people in buses than cars in the combined corridors and this figure has the potential to grow with a more efficient and convenient bus system.

“These pilot projects will show BRT’s potential to transform how people in Greater Boston get to where they need to go and how BRT can fit within the region’s transportation system,” said Mary Skelton Roberts, co-Director for Climate at the Barr Foundation. “Massachusetts residents require flexible, environmentally-sustainable transportation options they can count on.”

Transportation Secretary and CEO, Stephanie Pollack, said: “We applaud organisations like the Barr Foundation and BostonBRT in building support for bus improvements, including bus rapid transit and appreciate the collaboration of municipal leaders in improving transit service. We have already seen how service has benefitted customers with the all-door boarding pilot in Boston, the dedicated bus lane in Everett and the installation of transit signal prioritisation systems on Commonwealth Avenue.”

The grant recipients to be receiving $100,000 are listed below:

In collaboration with the MBTA, Arlington will conduct a one-month pilot of several BRT elements on the three-mile number 77 bus route along Massachusetts Avenue; the town’s main thoroughfare. This route has the highest ridership in Arlington and one of the top 15 highest-ridership routes in the overall MBTA bus system. The pilot, which will operate Monday through Friday, 06:00 to 09:00, includes transit signal prioritisation, bus queue jumping at traffic signals and a dedicated bus priority lane.

Cambridge and Watertown will partner with the MBTA to pilot numerous BRT elements for bus routes on Mount Auburn Street. Elements to be tested include all-day, dedicated bus lanes for significant segments of the street, inbound queue jump lanes and transit signal prioritisation; allowing buses to travel without impediment from other vehicles.

Everett will enhance its new dedicated bus lane on the south side of Broadway by adding upgrades to further demonstrate elements of Gold Standard BRT. The pilot includes platform level boarding facilities at two bus stops in Everett Square and TSP at three locations along Broadway that give southbound buses priority during peak-hours.

As part of the grant funding, BostonBRT will assist communities with coordination between state and municipal agencies, pilot design and implementation, communications and community engagement.

Municipalities were selected by a committee that reviewed criteria such as the number of BRT elements included within proposals, proof of concept, potential impact (including density of population and employment), municipal and community support and willingness to partner with state agencies to create a successful pilot.

“Arlington is excited to be part of this innovative pilot program to improve bus service in town,” said Arlington Town Manager, Adam Chapdelaine.  “Buses are essential to Arlington commuters and our goal is to shorten the ride and get Arlington residents to the Red Line faster. We hope this will result in more people taking the bus, fewer people driving to work and reduced congestion and pollution in the community.”

“Encouraging and improving public transit options improves mobility for everyone. The bus rapid transit pilot aligns with Cambridge’s Vision Zero efforts to make our streets safer for people of all ages and abilities to travel between work, school, shops and other destinations, whether they choose to walk, cycle, drive or take transit,” said Cambridge City Manager Louis A. DePasquale. “We are grateful to the Barr Foundation for their support in helping us implement the pilot and we look forward to collaborating with our neighbours in Watertown to make it a success.”

“As one of the few area cities without rail access, we know how important it is for our streets to move people more efficiently. We’ve had such great success in piloting the dedicated bus lane on Broadway we have made it permanent and are excited and grateful to the Barr Foundation for their assistance to further improve this busway,” said Carlo DeMaria Mayor of the City of Everett. “Through this concerted effort we hope Everett will be the first Massachusetts community to implement Gold Standard BRT elements permanently along this route.”