For the first time since the Metrorail system opened its doors to passengers in 1984, the Department of Transportation and Public Works (DTPW) has placed its first new train into service… 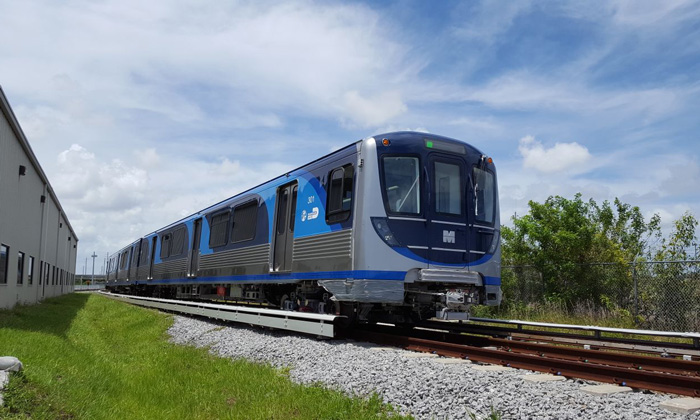 Miami's Metrorail services will now appear on the Lyft app.

Ushering in a new era of modern, high-tech trains, manufactured by Hitachi Rail Italy, improvements in both service reliability and overall passenger experience are expected.

“Today is a great day in Miami-Dade County’s history of providing public transportation. For the first time in more than 30 years of Metrorail service, we placed on our tracks the new high-performance, modern vehicles for our 25-mile Metrorail system. This, along with other enhancements, is one of the many ways that Miami-Dade government is improving transportation in our community,” said Miami-Dade County Mayor Carlos A. Gimenez.

“We proudly celebrate with our customer, Miami-Dade County, the inauguration of the county’s new Metrorail trains. Today, we are delivering state-of-the-art train technology and reliability to Miami-Dade County, which will help them to also deliver on their promise to the community,” said Maurizio Manfellotto, CEO of Hitachi Rail Italy. “This project marks our return to the American market, where Hitachi is now significantly present.”

Funded by approximately $313.8 million in surtax funds from the People’s Transportation Plan, this is the first four-car train of 136 cars that will make up a new Metrorail fleet, expected to improve the system’s quality of service. Each new rail car will feature automated announcements with upgraded sound, digital signs displaying the name of the next station, four digital monitors for extensive media content, high-speed Wi-Fi for passengers, interior bicycle racks, security cameras and energy efficient LED lighting.

The replacement of the Metrorail fleet is being expedited and Hitachi Rail has increased the number of crews performing various tests.

“Hitachi Rail designed our new Metrorail trains exclusively for Miami-Dade County. This means that there are no other rail trains like ours in the world,” said DTPW Director Alice N. Bravo, P.E. “Thanks to Hitachi Rail, the Citizens’ Independent Transportation Trust and DTPW staff, we were able to place the first Metrorail train into service just 20 months after assembly began. Moving forward, as new Metrorail trains are phased in, customers will begin to see improvements in service and enjoy a more comfortable ride.”

The travel experience in Miami has already begun to evolve as Metrorail riders are now able to download the free Miami-Dade Transit Tracker app, enabling them to plan a trip on transit. Also available is the EASY Pay app which turns a smartphone into a mobile ticket.

By July 2018, DTPW anticipates to have replaced half of the cars needed for operation at peak levels. The end of 2019 will show DTPW with all new rail cars required for peak-revenue service.