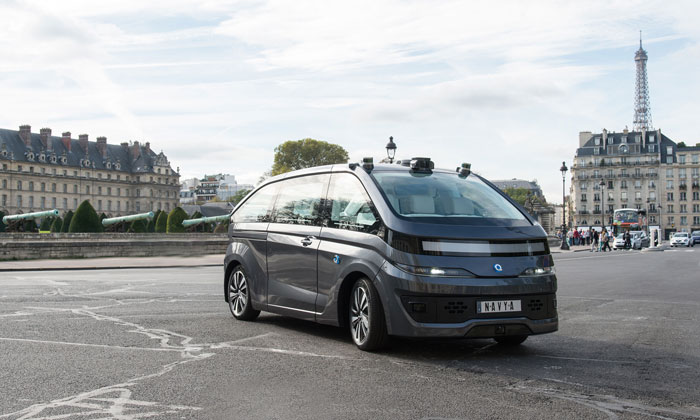 The cab is able to carry one to six passengers, and is capable of speeds up to 55 mph, but will average closer to 30 mph as it travels in urban areas to conform with local speed limits.

Available as either a private or shared service, AUTONOM CAB places an emphasis on well-being and comfort and will offer a wide range of services benefiting from fully connected technology. Users can order an AUTONOM CAB using a dedicated smartphone application (Navya App), and open and close the vehicle’s door to start it up. AUTONOM CAB is also capable of pre-empting traffic jams, ensuring that users can reach their destination on time.

Current plans are for the AUTONOM CAB to begin service in the second quarter of 2018.

AUTONOM CAB benefits from sophisticated multi-sensor technology with no fewer than 10 Lidar sensors, 6 cameras, 4 radars, 2 GNSS antennae and 1 inertial measurement unit (IMU). These sensors provide at least a triple redundancy across all functions, guaranteeing exceptional reliability. The on-board computer is capable of constantly merging data received by the sensor architecture. AUTONOM CAB’s intelligence is based on high performance steering and detection systems that combine a number of cutting-edge technologies to enhance safety.

In order to optimise navigation, NAVYA has created its own mapping tool that generates the most comprehensive and precise cartography. This has been trialled around the world.

Outside, AUTONOM CAB has a coloured light band that communicates with its passengers as well as pedestrians. Inside, the glass compartment provides users with a panoramic view of the city.