Members of the West Midlands Bus Alliance gathered to sign a renewed contract at the Coach & Bus UK Show at the National Exhibition Centre near Birmingham. 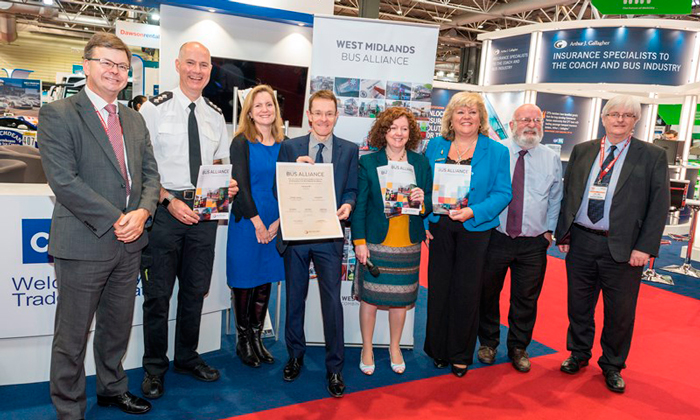 One of the aims for the Alliance’s renewal is to build on the success of the first two years of the West Midlands Bus Alliance and ensure further commitment from its partners towards continuing enhancements to the bus network across the region up to 2020.

The new agreement aims to:

“Four out of five public transport journeys made here are by bus – that’s an enormous number of people,” said Cllr Roger Lawrence, lead member for transport for the West Midlands Combined Authority. “The bus network is of fundamental importance to this region which is why continuing investment in the network by ourselves and operators is so important. In doing so we will enable people to go about their lives supporting and contributing to the local economy and creating a vibrant and integrated region.

“The bus alliance has been a great success and I welcome the further improvements that will be brought under this new agreement.”

When it was launched in 2015, the West Midlands Bus Alliance was the first of its kind in the UK. It consists of Mayor of the West Midlands Andy Street; Transport for West Midlands; the transport arm of the WMCA; the Safer Travel Partnership; watchdog bodies Transport Focus and the Confederation of Passenger Transport; local highways authorities and local bus operators including National Express West Midlands, Stagecoach Midlands and Central Buses.