Plans to expand driverless Parkshuttle in the Netherlands revealed

ParkShuttle, the world’s first driverless vehicle, is to continue operating for a further two years in the city of Capelle aan den Ijssel in the Netherlands. 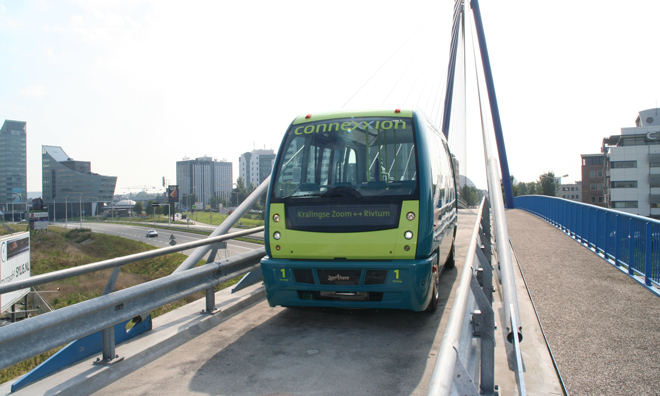 ParkShuttle, the world’s first driverless vehicle system, is to continue operating for a further two years in the city of Capelle aan den Ijssel in the Netherlands. 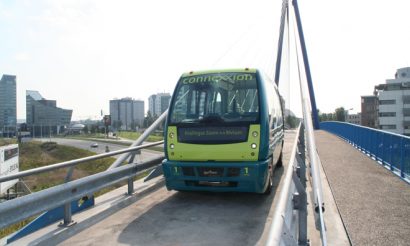 The driverless ParkShuttle will continue to run at business park Rivium following confirmation that operator Connexxion would continue to run services until 2018. The decision was made by the Metropolitan region Rotterdam The Hague (MRDH). Furthermore, the city of Capelle aan den IJssel has committed to renew the system and expand it once the concession ends.

Operating since 1999, the successful system now carries over 2,000 passengers per day. The current vehicles are over 13 years old and have each driven over 200,000 kilometres. Despite their longevity, passenger satisfaction on reliability, operational hours, waiting times and passenger information remains high. This, alongside the positive impact of the system on business park Rivium has led to the extension of the concession. As part of the extended franchise, remedial works will be conducted to improve the road surface and restore driving comfort.

The city of Capelle aan den Ijssel has also confirmed plans to renew and extend the system by late 2018. The initial extension will travel towards a stop at ‘Van Brienenoord’ bridge, where a station for the Waterbus will be created. The route to this location runs over public roads, amongst manually driven traffic. As such the ParkShuttle is likely to be the first autonomous system operating in mixed traffic without actually featuring a safety driver or steward on-board.

“Where autonomous transit has only become a hot item in the last 2 years, we have experience dating back to 1999”

‘We are realising more-and-more that we have been ahead of our time with the ParkShuttle’, comments Alderman Dick van Sluis, responsible for Roads and Transport. ‘Where autonomous transit has only become a hot item in the last 2 years, we have experience dating back to 1999. That gives us a great advantage and ensures we are in the spotlight both within the Netherlands and internationally.’

Within the region administered by MRDH there are several other locations where autonomous transit is being considered. Alderman Van Sluis continued: ‘Now that the concession has been extended, it allows looking at other systems and extending the ParkShuttle. The latter is our challenge for the upcoming period: how can the ParkShuttle contribute to the development of Rivium to an attractive and innovative location for companies.’

2getthere is currently developing its 3rd generation automated vehicle, incorporating the sensory systems to be able to drive in mixed traffic. The new vehicles are lighter, completely bidirectional and feature air-conditioning. The first prototype will be available end of January 2017. 2getthere is in contact with the city, MRDH and Connexxion about using these vehicles for the extension and renewal of the application.

2getthere’s CEO Carel van Helsdingen: “We are pleased with the 2 years’ extension and the ambition of the government to renew and extend the system. However, what pleases us even more is the positive ratings by the paasengers of the system. Over the years the vehicles have proven their reliability and service level during all weather circumstances.”