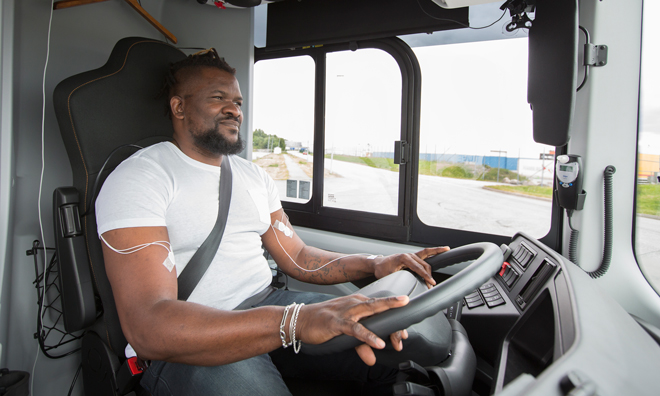 A study carried out by VTI, the Swedish National Road and Transport Administration, has found Volvo Dynamic Steering (VDS) system, launched by Volvo Buses last year, does reduce the risk of possible stress and strain in the shoulders, neck and arms of bus drivers who spend many hours behind the wheel every day.

The study carried out by VTI, the Swedish National Road and Transport Administration, examined muscle strain while driving both with and without VDS, and recorded how much the driver benefits from the system. In the tests, activity in the various muscle groups was measured in left turns, right turns, while negotiating a roundabout and when driving straight ahead.

Improving the manoeuvrability of the bus

VDS is based on a conventional mechanical steering system, where a steering shaft links up to a steering gear. The hydraulic servo-system generates power which the driver needs to turn the bus’s road wheels. The system utilises an electrically operated motor, attached to the steering shaft. Working in tandem with the hydraulic power steering, the electric motor is modulated by the electronic control unit thousands of times a second.

At low speeds, the electric motor generates additional power, while at high speeds the steering is automatically regulated, compensating for irregularities which pass up to the steering wheel, from grooves or hollows in the road surface

According to the VTI report, the system cuts muscular strain by 20 to 30 percent and for certain manoeuvres by up to 70 percent. 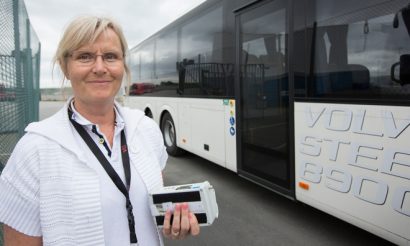 Commenting on the findings, Dr Anna Anund, associate professor and head of research at VTI said: “There’s no doubt that this type of system improves the driver’s working environment. Many drivers experience pain in their joints and muscles, and it is obvious that they benefit from a system of this sort.”

Furthermore, all 20 drivers reported that they would benefit from the system in their everyday work.

“The longer the tests ran, the more positive the drivers were to the system. This is something they really want,” says Dr Anund.

Commenting on the study, Volvo Buses’ ergonomics expert Maria Gink Lövgren said “The VTI study confirms the positive effects of Volvo Dynamic Steering for drivers both on long-distance routes and in urban driving. With the introduction of VDS on our city buses too, many more drivers will be able to handle tight cornering, roundabouts and other demanding manoeuvres in a far safer and more relaxed way.”

The system is already integrated on Volvo’s long-distance buses sold in Europe and as of autumn 2017 will also be available on the manufacturers city and intercity buses.