Automated buses on the streets of Helsinki generate attention

Automated buses have begun operation on the streets of Helsinki, Finland, during a trial coordinated by the Metropolia University of Applied Sciences.

Automated buses have begun operation on the streets of Helsinki, Finland, during a trial coordinated by the Metropolia University of Applied Sciences. 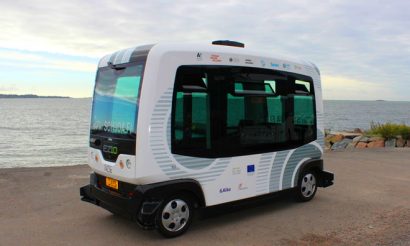 On the 16th August 2016, the first EasyMile EZ10 automated buses entered the Finnish capital to kick-start the SOHJOA-project, funded by European Structural Fund and lead by the Metropolia University of Applied Sciences. Trials of the automated vehicle will now begin for one month on the roads of Helsinki, Espoo and Tampere following an initial trial held last year at the country’s Vantaa Housing Fair.

The Finnish Transport Safety Agency, Trafi, has granted permission for two ‘robobuses’ to navigate Helsinki’s Hernesaari district negotiating traffic and unpredictable road users. The development of automated vehicles in Finland has progressed faster than other countries due to the country’s law not requiring vehicles to have a driver on public roads.

“This is actually a really big deal right now”

Speaking to Yle, Harri Santamala, test project lead and Metropolia University of Applied Sciences project manager, said: “This is actually a really big deal right now. There’s no more than a handful of these kinds of street traffic trials taking place, if that.”

Automated buses in the streets of Helsinki will help find solutions for city traffic, safety and user experience

The project aims to create a platform for Finnish companies to develop new products and services while increasing the understanding of the transition underway among cities and their residents. This will include finding solutions for city traffic, safety and user experience.

Test project lead Harri Santamala insisted that the self-driving buses could be used to supplement existing public transportation options in the future.

“Their purpose is to supplement but not to replace it. For example the goal could be to use them as a feeder service for high-volume bus or metro traffic, like Kutsuplus. In other words the mini-bus would know when the connecting service is coming and it would get you there on time,” he explained. 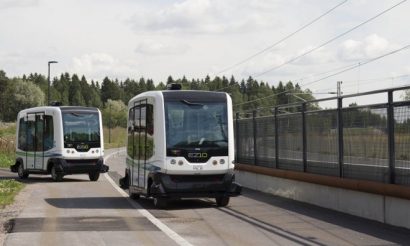 The cost effective, energy efficient, small electric buses can transport up to 12 passengers at a time (six sitting and six standing), at a cruising speed of 20 km/h. The vehicles have a maximum speed of 40km/h.

After Helsinki, buses will operate in Espoo from August to September and in Tampere from October to November, where they will be in use until the first snow falls. In the spring 2017 the piloting will continue.

Reacting to news of the trial, Dale Green, Marketing Director at Digital Realty said: “This initiative would certainly consolidate Finland’s position as one of the leaders in autonomous vehicles. It will be interesting to see how the city’s connectivity foundations cope with handling the vast amounts of data that self-driving buses will generate. In the UK, we face serious issues with Wi-Fi and impermeable connectivity, to the point driverless vehicles could fall at the first hurdle. If Helsinki has reinvented its roads by installing sensors and edge compute technology with small, local data centres that are in close proximity to the buses, the trial is more likely to be a successful one.”