The UK government has awarded £30 million to thirteen successful bidders to purchase an additional 326 buses as part of the low emission bus scheme. 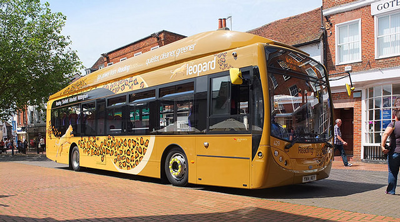 The UK government has awarded £30 million to thirteen successful bidders in order to purchase an additional 326 buses as part of the low emission bus scheme.

On Monday 25 July 2016, Transport Minister Andrew Jones confirmed more passengers would benefit from greener bus journeys thanks to £30 million of government funding as part of the low emission bus scheme.

Thirteen bus operators and local authorities across England have been awarded a share of the £30 million funding to buy low emission buses and install chargepoints and other infrastructure. The winning bidders will be able to add 326 buses – including electric, hybrid, hydrogen and biomethane buses – to their fleets, and install over £7 million worth of infrastructure.

The low emission bus scheme builds on the Green Bus Fund, which saw £89 million of government funding put more than 1,200 green buses on England’s roads. The scheme forms part of a £600 million package of measures from the Office for Low Emission Vehicles by 2020

Among the winners is Sheffield City Region, which has been awarded £1.3 million for 44 buses fitted with hybrid technology.

Other successful bidders include:

“Greener buses are good for passengers and good for British business”

Commenting on the award, Transport Minister Andrew Jones said: “My message is clear – greener buses are good for passengers and good for British business.

“Low emission buses have already proved to be a real success across the country. They are cost efficient, good for the environment, and there are wider benefits. We have provided more than £2 billion of funding to greener transport schemes since 2011, and by supporting this technology the government is ensuring the UK is driving innovation and investment up and down the country.”

A full list of winning bids under the low emission bus scheme can be found here.