Two additional Irizar electric buses have been delivered to the Spanish city of San Sebastian, adding to an initial order in July 2014. 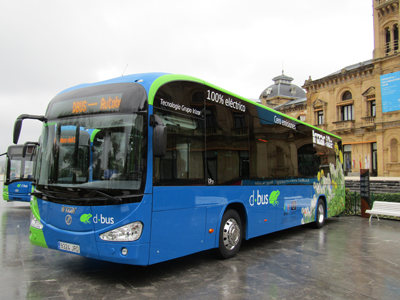 Two additional Irizar electric buses have been delivered to the Spanish city of San Sebastian, adding to an initial order in July 2014.

Spanish public transport operator Dbus has taken delivery of two Irizar 100 percent electric buses for operation in the city of San Sebastian. The two buses join the first zero emission bus which has been operating since July 2014.

The fleet will serve on line 26 which links Amara with Martutene along the banks of the Urumea (Riberas, Loiola, Txomin and Martutene).

San Sebastian electric buses have a range of over 200km

The 12-metre long Irizar i2e model and has been designed to optimise energy in order to enhance the performance of Dbus’s city buses. Moreover, the zero emission vehicles can achieve a range of over 200 kilometres and include sodium-nickel batteries that provide power to the electric motor, resulting in a nominal torque of 1500 Nm and 180 kW of power. The vehicle regenerates braking energy as electricity, increasing battery life. 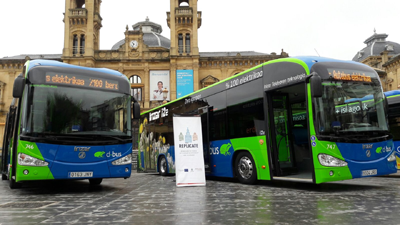 In addition to being fully accessible, the vehicles are fitted with USB ports – a new feature enabling electronic devices to be charged free of charge while travelling.

Work has also taken place on both the exterior and interior design in order to convey the commitment to sustainability and to environmentally responsible public transport. The interior of the vehicle has features which enable the passenger to feel and enjoy the benefits provided.

Futhermore, Irizar has installed a smart charging station for the buses, developed by JEMA (an Irizar Group company), which automatically manages the night-time charging process in an optimal manner.