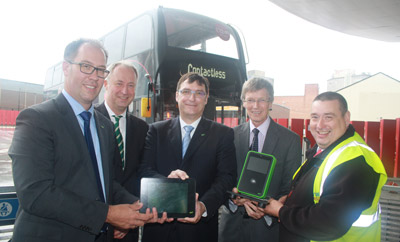 National Express West Midlands has signed a multi-million pound agreement for ticket machines that can take bank cards, smartphones and smart watches, as well as cash and Swift smartcards. The state-of-the-art contactless technology will be fitted to 1500 buses over the next two years.

The first ticket machines will be appearing on buses in Coventry at the end of this year, and will be rolled out across the whole West Midlands fleet over the following two years.

National Express West Midlands awarded the contract for driver consoles, on-board computers, ticket printers, validators and the back-office to German company INIT Innovations in Transportation Ltd, who are based in Karlsruhe.

Commenting on the introduction, Managing Director of National Express West Midlands, Peter Coates said: “We know our customers want the choice of using contactless when they travel. Only a month ago, we introduced it on the Midland Metro and already 7 percent of passengers buying a ticket on board are using contactless. So, as part of our pledge to the West Midlands Bus Alliance to get more people travelling by bus, we are investing in contactless because it makes journeys quicker and easier for passengers.”

Jens Mullak, Managing Director of INIT Ltd, added: “Our solutions are already in use around the globe, and National Express is an important new customer for us in the UK. I think that, with the popularity of contactless bank cards and the use of mobile phones, contactless will surely replace cash payments more and more.”

Denver’s RTD partners with Lyft and Masabi on mobile ticketing

How COVID has opened a new chapter for public transportation