Bangkok to receive new metro trains from Siemens and CRRC 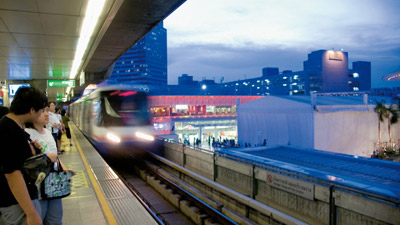 The contracts, worth approximately TH Baht 11 billion, will see a consortium consisting of Siemens and Turkish public transportation vehicle manufacturer Bozankaya deliver 22 four-car Inspiro trains to BTSC for operation on its BTS SkyTrain System. In addition, Siemens will take over service and maintenance of the fleet for a 16 year period.

Commenting on the new order, Jochen Eickholt, CEO of Siemens Mobility Division said: “With the new trains, we will be seamlessly continuing our success story in Bangkok. Specially designed high-capacity trains will enable the line to transport over one million passengers a day that has been forecast.”

In a second contract, Chinese rail vehicle manufacturer, CRRC will deliver a further 24 four-car trains helping to provide the necessary additional capacity to support increasing ridership. The new vehicles will operate on the Sukhumvit Line from Mo Chit to Bearing stations and the Silom Line from National Stadium to Bang Wa stations. Additionally, the new trains will provide passenger service on the new line extensions (Green Line) to Samutprakarn and Ku Kot. This project is currently under construction. 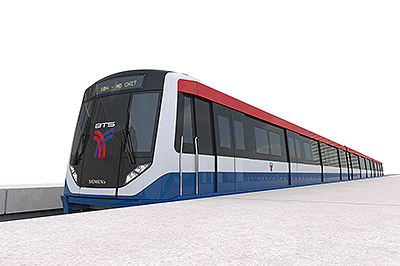 The new trains will feature the latest technology, similar to existing trains. However, according to BTSC further improvements will be made to enhance efficiency and accessibility. Major train components will be sourced from leading international suppliers, as well as from local suppliers for interior equipment, such as stanchions, chairs and hand straps. The first batch of new trains will arrive in early 2018 and the remaining delivered in 2020. Following delivery and final commissioning of all new trains, trial running will be carried out prior to introduction into passenger service.