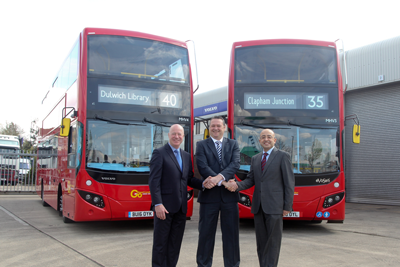 The double deck buses, featuring new MCV ‘Evoseti’ style bodywork on a hybrid chassis, are specific to Go-Ahead and have been built to TfL standards.

The first of their kind to be deployed in London, Go-Ahead have just taken delivery of the first instalment – 20 vehicles that will be operating initially on the Dulwich to Aldgate routes 35 and 40 – with a further 19 buses to follow shortly and the remaining number to roll out throughout the year.

Richard Harrington, Engineering Director for Go-Ahead London, said: “It is exciting to see the first bus with MCV Evoseti bodywork enter service in London. We have trialled MCV on Euro 5 chassis previously, but never before with Euro 6 and on the widely recognised London red bus.”

“We visited the MCV factory in Egypt with Volvo to see the new bodywork being developed and manufactured, and it’s great to see it finished, on the chassis and entering service in London.”

Phil Fletcher, Fleet Sales Manager for Volvo Bus, said: “As a leading bus manufacturer, our aim is to offer operators like Go-Ahead the best in operational performance with a good choice of bodywork to suit their many needs and requirements.  We believe the B5LH with all of its options ticks all these boxes perfectly.

“Our B5LH hybrid vehicle meets all the operational requirements and demands of London bus routes and we believe it provides some of the cleanest emissions standards available in the world today.”

The Volvo B5LH hybrid driveline delivers proven best in class fuel economy and CO2 reductions of up to 39% compared to their conventional diesel equivalents, as well as achieving the highest possible levels of reliability.