Live travel information is now available for customers travelling across the tram network via the Transport for London (TfL) website and Electronic Service Update Boards. 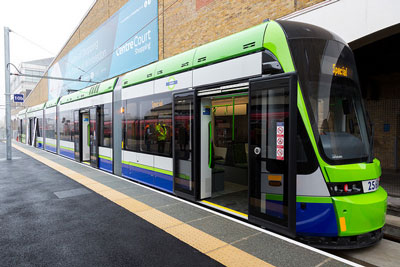 Live travel information is now available for customers travelling across the tram network via the Transport for London (TfL) website and Electronic Service Update Boards.

Up-to-the-minute travel information has become available to customers travelling on trams in south London. Information can be accessed through its website or via Electronic Service Update Boards at certain stops. Customers can now view the service information, destination and status of each tram.

Customers can now access service information, destination and status of each tram

The data, which is also being made available free to app developers at tfl.gov.uk/developers, forms part of TfL’s wider commitment to make the information it holds openly available to help Londoners and visitors get around.

Around 8,200 developers are now registered for TfL’s Unified API open data. As smartphone usage for travel information continues to increase, almost 500 apps are now being directly powered through this data – providing Londoners with a wide range of useful up-to-the-minute information about public transport and the road network.

Rory O’Neill, TfL’s Director of Trams, said: “The Tram network is a vital transport link in south London and much has been done to improve it, including introducing extra services to help meet growing demand. Making live service information easily available to our customers will make using the tram network even easier, and shows how we’re harnessing technology to give people better journeys.”

In addition to the availability of live travel data, TfL has introduced a number of improvements to its Tram service, including increasing services by 50 percent between Wimbledon and Croydon after work to build an additional train platform at Wimbledon was completed last year.  This was aided by the introduction of four additional trams.

New track has also been laid between Mitcham Junction and Beddington Lane increasing capacity and allowing trams to travel in both directions simultaneously.

Demand for the Tram network is continuing to grow. Since it opened in 2000, passenger numbers have risen from 18.5 million in its first year of operation to over 32 million in 2014/15. TfL has forecast for demand to increase to approximately 60 million by 2030.