A limited cycle trial has begun on Tyne and Wear Metro allowing customers to travel on the Metro with their bikes. 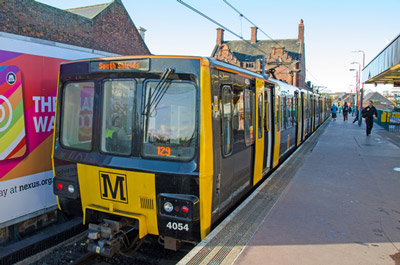 A limited cycle trial has begun on Tyne and Wear Metro allowing customers to travel on the Metro with their bikes.

Cyclists are now able to travel on the Tyne and Wear Metro with their bikes as part of a limited trial which began on Monday 04 April for a six month period. As part of the trial, customers will be able to travel with bikes between Callerton Parkway and Jesmond stations. Currently, only folding bikes are permitted on all sections of the Metro.

There will be no additional charge and customers can take their bikes on the Metro between Monday and Friday, from 10am until 3pm. One bike will be allowed per Metrocar and they must be kept in designated storage areas near the perch seat. However, priority will be given to wheelchair users and customers with prams. Customers must remain with their bike at all times.

Paul Walker, Customer Service Director at DB Regio Tyne and Wear, which operates the Metro on behalf of Nexus, said: “It is important we conduct this trial to see what the impact is of allowing all bikes on Metro for the first time.

“Cycling is a popular recreational activity with 3.1m people riding a bike each month in the UK.  We want to support cyclists as much as we can here in Tyne and Wear, and we and Nexus have already invested to make sure there is secure cycle storage at every station.

“This trial will enable us to establish if we can safely and comfortably accommodate bikes on Metro. We know this is an issue passengers can have very different and strong views on, so we are asking the question with a trial in one area when Metro is less busy, and we’ll be following what happens carefully.”

Nexus and its train operator DB Regio Tyne and Wear are currently implementing an investment programme to improve integration between cycling and Metro, with new cycle storage at or close to almost all metro stations and new smartcard-operated cycle lockers in use from the spring.

Nexus worked with cycle organisations to install the right cycle storage and set up a special task group with users to explore the potential to allow non-folding bikes to be carried on trains. This identified scope for a limited trial to be run once the refurbishment of the train fleet was completed in late 2015.

The trial will identify whether there is scope for bikes to be allowed on Metro going forward, while also informing the design and specification for investment in a new train fleet.

Paul added: “Many of our customers have different requirements and we’re committed to looking at ways to continually deliver for our customers and ultimately adding value to the Metro experience. It’s hoped that this new scheme will benefit our customers and cycling enthusiasts alike.”

Further information about the trial can be found here.

One response to “Cycle trial begins on Tyne and Wear Metro”