London Underground has launched a six-month ‘stand on both sides’ escalator pilot at Holborn Tube station to reduce congestion. 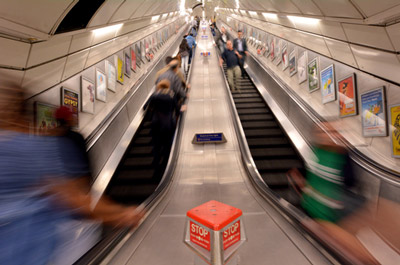 London Underground has launched a six-month ‘stand on both sides’ escalator pilot at Holborn Tube station to reduce congestion.

From 18 April 2016, passengers travelling via Holborn Tube station will be asked to stand on both sides of two ‘up’ escalators, in plans to reduce congestion at the station. The pilot will take place over a six month period and encouraged through signage and customer information. The additional ‘up’ escalator will still be available for people who want to walk.

According to Transport for London (TfL), a variety of messages, developed with the help of the behavioural science department at the London School of Economics, will be tested at different times to see which work best. These include standard instructions to customers and ‘light’ messages that play on words about standing.

These will be communicated in various ways, including using a talking projection of a staff member, electronic versions of the triangular ‘stand on the right’ signs that customers pass as they travel up the escalator, signs on the floors, foot prints on the escalator steps, handprints on the handrails and station announcements.

Peter McNaught, Operations Director at London Underground, said: “It may not seem right that you can go quicker by standing still, but our experiments at Holborn have proved that it can be true. This new pilot will help us find out if we can influence customers to stand on both sides in the long term, using just signage and information. Anyone who wants to walk on the other escalators will be free to do so, but we hope that with record numbers using the Tube, customers will enjoy being part of this experiment to find the most efficient ways of getting around.”

The London Underground convention is for customers to stand on the right of escalators, allowing others to walk on the left. However, at stations with very long escalators, such as Holborn, few customers choose to walk, meaning that much of left-hand-side of the escalator is unused. London Underground undertook a similar pilot in November and December 2015, which showed 30 percent more customers could use an escalator in the busiest parts of the day if they stood on both sides.

During that experiment, extra staff were brought in to ask customers to stand on both sides. A similar arrangement will be in place at the start of the new trial, after which the staff will not be present and London Underground will be testing whether customers will change their behaviour in the longer term through use of the signs and messages and force of habit.