Alstom has revealed designs for the new Citadis trams that will circulate on the East-West line and Line 3 of the Nice Côte d’Azur Metropole. 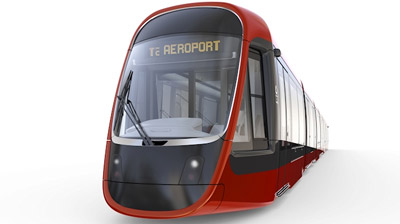 Alstom has revealed designs for the new Citadis trams that will circulate on the East-West line and Line 3 of the Nice Côte d’Azur Metropole.

Alstom has unveiled designs for the Citadis trams that will come into service on the Nice Côte d’Azur tramway from 2018 – early 2019. The ceremony follows a major public consultation on the choice of tram design for the new tramway between 30 November 2015 and 31 January 2016. Inhabitants voted to choose a design out of three propositions created and presented by the French designer ORA ÏTO, with whom Alstom collaborated to personalise the Citadis X05 range for the city of Nice. The chosen ochre design was selected by 44 percent of voters with 14,886 inhabitants giving their opinion.

Preliminary designs put to the public vote can be seen below and include The city in blue, Ribbon and Ochre:

The Citadis X05 is the latest generation in the Citadis range, offering greater comfort with 40 percent more windows compared to the previous generation in circulation on Line 1 of the Metropole, LED lights for soft and homogenous lighting, large individual seats and journey-related information displayed on extra-wide screens. Accessibility will be increased via double doors throughout the entire length of the tram, which will also increase the passenger exchange ratio in stations by 20 percent. A real-time video protection system and highly fireproof materials will ensure passenger security. 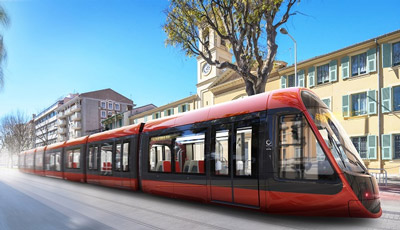 Unlike the existing Line 1, the new tramway will not feature overhead contact lines on the entire surface section of the route. This option was requested by the Nice Côte d’Azur Metropole to integrate the new tramway line into the urban landscape while preserving the city’s architecture. Instead, the line will be installed with intermittent charging in stations. 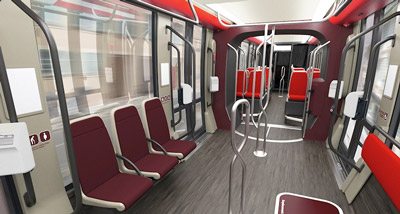 The future lines of the tramway will, therefore be entirely catenary-free (apart from the sections in the tunnel). For this, Alstom will supply its latest ground-based static charging technology, SRS. This allows the tram to charge safely and automatically in under 20 seconds while stopped inside the station. The trams will be equipped with an on-board energy storage device, Citadis Ecopack. SRS draws on the functional principals and safety standards of APS, or ground power supply. Equipped with this technology, the future trams of the East-West tramway line will be able to charge up at each station as passengers get on and off, without extra stopping time and without driver intervention.