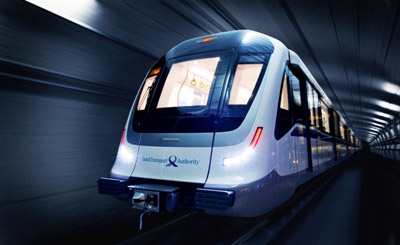 The Land Transport Authority (LTA) of Singapore and operator SBS Transit (SBST) have marked the opening of Downtown Line stage 2 (DTL2) and subsequent passenger services on the new 16.6km stretch of metro line. Services will run between Bukit Panjang in the North West of the island city-state to Bugis, calling at 12 stations including interchanges at Little India, Newton, Botanic Gardens and Bukit Panjang. The new line is expected to save passengers up to 30 percent in travelling time.

Bombardier has supplied all 111 MOVIA Metro cars (37 three-car trains) for Downtown Line Stage 2. This follows the supply of 24 MOVIA Metro cars (eight 3-car trains) for the 4.3km section of Stage 1 which opened in 2013. Bombardier will also supply vehicles for the Stage 3 of the project comprising of 21km of track and 16 stations. The line will connect eastern regions of Singapore to the CBD and Marina Bay in 2017.

Complementary to the Mass Rapid Transit (MRT) network, the Bukit Panjang Light Rapid Transit (BPLRT) feeder system connects residents from Singapore’s Choa Chu Kang and Bukit Panjang districts to the DTL2 at a significant interchange at the Bukit Panjang station. Last month, Bombardier also completed a project to upgrade the BPLRT. The 7.8 km INNOVIA APM 100 automated people mover system first opened in 1999 with 19 vehicles and the BOMBARDIER CITYFLO 550 fixed block train control system. In 2012, LTA ordered an additional 13 INNOVIA vehicles, as well as upgrades to the signalling and communications systems, as part of a project to increase capacity on the system.

According to Bombardier, the delivered MOVIA Metro cars are environmentally-friendly thanks to the use of the latest propulsion technology with low energy consumption, optimised performance and are also up to 90 percent recyclable. Integration of ECO4 technologies, including regenerative braking and an intelligent air-conditioning system, contribute to energy savings.