York by Bus: A new look bus interchange for the city centre

Residents and visitors are set to benefit from a new look bus interchange* in the heart of York’s city centre, in and around Exhibition Square… 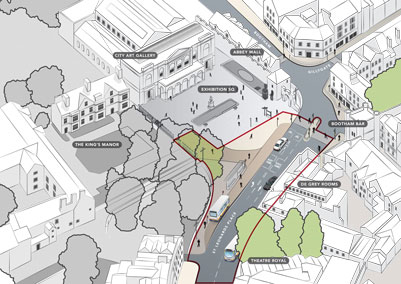 Residents and visitors are set to benefit from a new look bus interchange* in the heart of York’s city centre, in and around Exhibition Square.

The bus interchange at Exhibition Square is a key location for many bus services for residents, visitors and people living in rural areas to the North of York, handling around 750,000 bus passenger journeys a year.

The scheme will include works to improve the area for passengers, pedestrians and cyclists by creating more waiting space for passengers, new bus shelters, improved seating, real time information screens and a new on-road cycle lane. The scheme will start on 15 September and will be completed before St Nicholas Fair in November.

Cllr David Levene, Cabinet Member for Transport, said: “Our aim is to regenerate the city centre, taking pride in its appearance and ensuring its economy continues to thrive, and in this case to transform this part of the city into a high-quality cultural hub for York with improved amenities.

“Exhibition Square and the Theatre Interchange is a crucial location for a number of well-used bus services, but the environment at the Interchange is currently poor both for bus passengers and other pedestrians using the area. Through ringfenced bus-improvement funds as part of the Better Bus Area programme, as well as Reinvigorate York investment in the city centre, the council will make Exhibition Square a better place for residents, visitors, and commuters to use and enjoy.”

Residents, visitors, businesses and bus operators were asked for their views on improvements for bus passengers through a city-wide consultation earlier this year.

Of those expressing an opinion, a majority backed the changes (50 per cent agreed, 42 per cent disagreed) to increase space for pedestrians in Exhibition Square by reducing the size of the current bus pull in and reallocating this space to make a larger and more usable area for passengers.

Over 600 individual responses were submitted during the consultation for three Reinvigorate York schemes including Exhibition Square/Theatre Interchange.

The council took on board comments from bus operators and residents relating to the possible impact of the proposals on bus services, including maintaining the level of local services, management of tour bus occupancy of the square, reliability, timetabling, scheduling, and any possible changes to services.

A presentation was also made at a Quality Bus Partnership meeting in February to representatives of bus operators currently using Exhibition Square.

John Carr, Chair of York’s Quality Bus Partnership, said: “Exhibition Square is a focal point both for regular travellers and for visitors to York. This imaginative scheme will improve facilities for bus users, reduce delay to buses and with other work for Reinvigorate York enhance the square’s appearance.”

Works to carry out the improvements start next month and will be funded through part of the government’s Better Bus Area Fund programme, £3.5m of which was awarded to City of York Council by the Department for Transport in 2012. The scheme will also be supported by the Reinvigorate York initiative.

The estimated cost of the improvements to the Theatre Bus Interchange in Exhibition Square is £270k, funded from the council’s match funded contribution to the Better Bus Area Fund programme. Other improvement work being carried out as part of this phase of work will be funded from the Reinvigorate York initiative.

The proposed improvements at Exhibition Square and the Theatre Interchange will also complement other developments and investments in this immediate area including the Minster Piazza, housing plans for St Leonard’s and the refurbishment of both the Art Gallery and Theatre Royal.

Cabinet approved the scheme at a public meeting on 1 July. To view the cabinet report visit: http://democracy.york.gov.uk/ieListDocuments.aspx?CId=733&MId=8327

To find out more about York by Bus visit www.itravelyork.info/

*A bus interchange is a location where a number of bus services meet and passengers are able to change easily from one bus to another. Interchanges are commonly used in cities like Leeds, Edinburgh and London.

By City of York Council