In addition to providing East Londoners with direct travel between central London and Barking Riverside, the new River Bus service will create important new links to thousands of jobs across the capital. 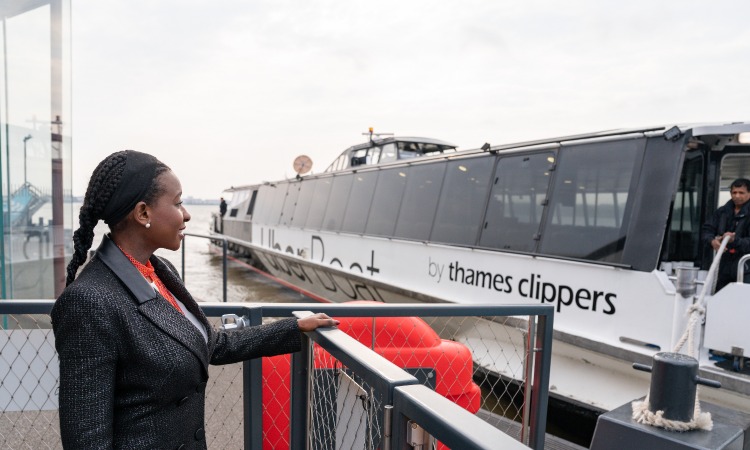 Uber Boat by Thames Clippers has announced the eastward expansion of its River Bus service on the Thames, with the servicing of the brand-new Barking Riverside Pier, which is now the most eastern stop on its RB1 route.

Brought forward by Uber Boat by Thames Clippers and Barking Riverside Limited, a partnership between L&Q and the Mayor of London, the service initially launched on 25 April 2022, ahead of schedule. In order to complete the landscaping and finishing touches, further works to the pier and the landside approach will be occurring over the following few weeks.

The new service will provide transformative new, direct travel times between central London and Barking Riverside, one of London’s largest new neighbourhoods, helping more East Londoners to access the river. The service will run during peak hours Monday to Friday, and all-day during weekends, with a 20- to 30-minute frequency.

As well as connecting residents to the city’s thriving leisure and culture scene, the River Bus service will also create important new links to thousands of jobs across the capital – significantly enhancing employment opportunities for local people.

In addition, it will create a much-needed link between the north and south of the river, with journeys to Woolwich taking less than 10 minutes. Promoting capital-wide connectivity, this will bridge a critical gap between Barking and Dagenham and new Crossrail services from Woolwich Station.

Barking Riverside is one of London’s most prominent new neighbourhoods, which will create over 10,000 homes, as well as commercial and leisure facilities. A new London Overground rail station will also be opening later in 2022, making this new neighbourhood even more accessible.

Matthew Carpen, Managing Director of Barking Riverside Limited, said: “This is a really important milestone, not just for the Barking Riverside development and its residents, but for London as a whole, as the city continues to move eastwards. This service will help commuters and families to take advantage of much quicker connections into central London, as well as introducing Barking Riverside, known for its wildlife and vibrant community, to the rest of London.”

Uber Boat by Thames Clippers CEO and Co-Founder, Sean Collins, said: “We’re incredibly excited to be able to service Barking Riverside Pier ahead of schedule. This pier, the 24th in our network, marks a significant milestone in the eastward development of our River Bus service and comes at an exciting time for our business as we make strides towards a sustainable future.”