The Gold Coast Smart Shuttle Trial will see an autonomous shuttle follow a fixed 2.4km route around Main Beach to test how autonomous technology can be safely integrated into busier live traffic environments. 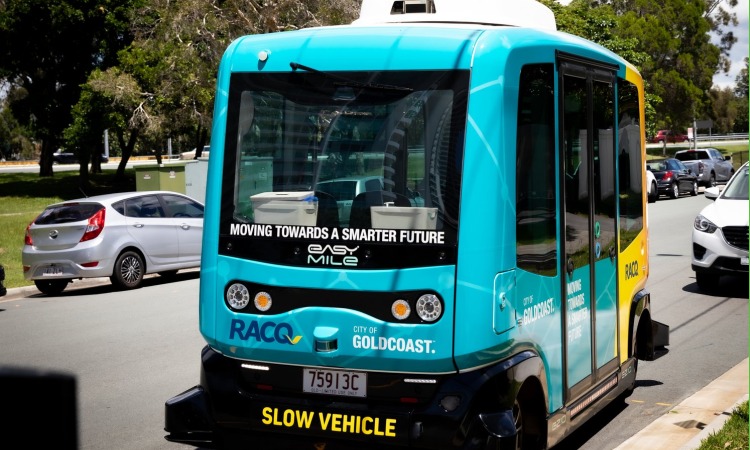 Kinetic has announced the launch of the Gold Coast Smart Shuttle Trial as part of an autonomous vehicle research programme that is being conducted by the Royal Automobile Club of Queensland (RACQ). RACQ is working in collaboration with the City of Gold Coast, with the support of vehicle manufacturer EasyMile and Kinetic-owned Surfside Buslines.

“Autonomous vehicles are an example of emerging transport technology that will revolutionise the way that we travel,” said Councillor Darren Taylor. “It’s exciting to now have the opportunity to test them out in real world situations.”

Following extensive mapping and testing, the RACQ Smart Shuttle will operate a free passenger service between 11:00 and 15:00, seven days a week until December 2022. The service will begin operation from 28 March 2022, with on-demand transport available in Nerang, Highland Park and Pacific Pines.

The shuttle will follow a fixed 2.4km route around Main Beach, travelling up to a speed of 18km/h. There will be seven dedicated shuttle stops along the route, with information being displayed at each of the stops.

RACQ’s Head of Public Policy, Susan Furze, said: “After two successful trials with Redland City Council at Karragarra Island and Raby Bay, we’re eager to better understand how this technology can be safely integrated into a busier live traffic environment and its potential to fulfil future transport needs. The bus will use high-tech sensors to self-drive around the set route, stopping at designated locations to drop off and pick up passengers. We’ll be monitoring how the shuttle interacts with other road users and existing transport services in the area.”

While the RACQ Smart Shuttle is autonomous, a chaperone will be on board to ensure that the vehicle is operating safely, assist passengers and speak with them about how the technology works.

Furthermore, key locations will have fixed pick up and drop off points. However, other pickup points across the zones may vary as they will not be restricted to using fixed bus stops or signage. This flexible approach is aimed at enhancing convenience and choice for customers.

Matthew Campbell, Kinetic’s Executive General Manager for Queensland, said: “The geography of the Gold Coast is diverse and so are the travel needs, and it’s important that, through our partnership with TransLink, we continue to offer public transport options that are responsive to customer feedback and travel behaviours. As cities become increasingly intelligent and public transport users seek flexibility, demand responsive travel has an important role to play in the region’s broader public transport system, and this is something that we have experienced in other cities where we have operated similar trials.”

Autonomous vehicle trials have been conducted across several cities in Australia and internationally, which allows the Gold Coast to leverage the learnings to improve the technology even further.