A new campaign to encourage even more people to travel by bus in York lauches this week. 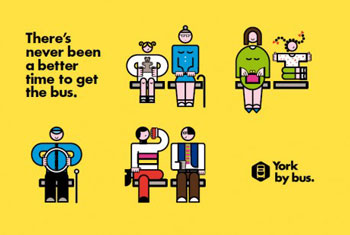 Supported by all bus operators in York and the York Quality Bus Partnership, the campaign builds on a package of improvements which will help to further support bus services around the city. The campaign will also be used to launch the new real time information screens across the city centre, York’s new and improved Park&Ride sites and the city’s new transport smartcard, which will be launched in 2014.

Cllr Dave Merrett, Cabinet Member for Transport, Planning and Sustainability, said: “Our aim is to encourage even more people to travel by bus and increase passenger numbers by 18 per cent by 2015. We know this campaign will help to deliver real benefits for the city and for every £1 spent in York , this project should deliver £4 of benefits by reducing congestion, improving air quality and health, and reducing road accidents.

“Through this campaign we hope to raise even more awareness of the benefits of travelling by bus in York. We have one of the best Park & Ride services in the country and offer a number of frequent and several now reduced cost bus services across the whole of York. Working with bus operators this is set to be the biggest bus campaign York has ever seen!”

John Carr, Independent Chair of the York Quality Bus Partnershp said: “By working hard together bus operators and the council have secured the funding to invest in the technology and improve the infrastructure to make bus travel better than ever for everybody in York. We have set ambitious targets to carry even more people enjoying the benefits of one of the country’s leading bus partnerships.”

Nigel Eggleton at Transdev, said “Transdev helps thousands of residents and tourists get to their destinations every year so we welcome this new campaign which will hopefully encourage even more people to travel by bus in York.”

Will Pearson, Business Manager for First in York, said: “We are delighted to work in partnership with City of York Council to further encourage more customers to consider using the bus. Bus travel has financial, environmental and social benefits and we would urge people to give bus travel a try on the run up to Christmas.”

Nigel Featham, regional managing director for Arriva Yorkshire, said: “We are delighted to be part of the York by Bus campaign. By making bus service information easily accessible we can encourage people to start choosing the bus for more of their journeys.”

The campaign is funded through part of the £3.5 million Better Bus Area Fund, awarded to City of York Council from the Department of Transport in 2012.

To find out more about the campaign or to find the best bus route through York, try out the council’s i-Travel York new online Journey Planner at www.itravelyork.info

By City of York Council