Debate has been sparked within the transport industry among politicians, local authorities, and unions alike, as face coverings look set to be ditched as a legal requirement in England. 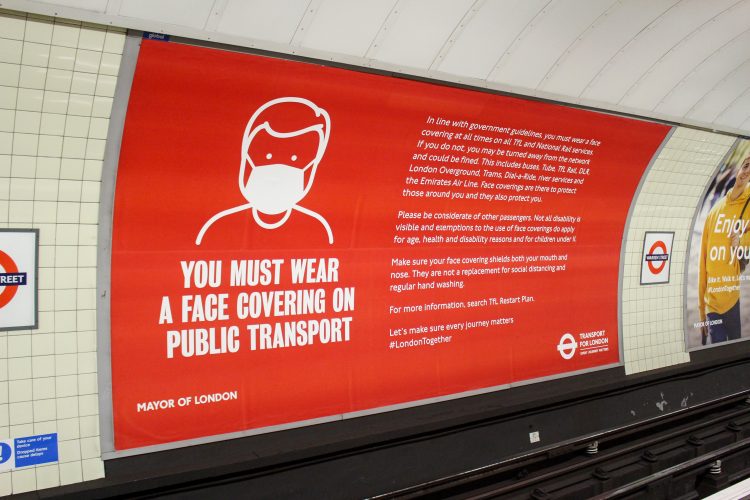 Criticism has been levelled at the UK Government after Prime Minister Boris Johnson announced it would no longer be mandatory to wear a face covering on public transport in England from 19th July.

Johnson announced the shift in policy at the same time he revealed it was likely all England would move to the final step of its roadmap out of the pandemic on 19th July, which would mean the end of most restrictions on daily life, though this is subject to confirmation on Monday 12th July.

The shift in stance has come under fire by scientists and local leaders alike though, as the public is being asked to change the way it thinks about COVID-19.

“I struggle to see how Ministers can drop the requirement to wear masks on public transport without causing real problems for some people who are dependent on it,” said Andy Burnham, Mayor of Greater Manchester, via Twitter.

“Those more vulnerable to infection or anxious about it will be put in a very unfair position.”

I struggle to see how Ministers can drop the requirement to wear masks on public transport without causing real problems for some people who are dependent on it.

Those more vulnerable to infection or anxious about it will be put in a very unfair position.

“The wearing of face coverings on public transport helps reduce the spread of Covid, and crucially gives Londoners confidence to travel – which is vital to our economic recovery.”

The wearing of face coverings on public transport helps reduce the spread of Covid, and crucially gives Londoners confidence to travel – which is vital to our economic recovery.

Interestingly, Khan also announced that further talks between Transport for London (TfL), the Department for Transport (DfT), and other transport providers were planned. As Peter Walker, Helen Pidd, Linda Geddes, and Gwyn Topham wrote in The Guardian, it is possible that TfL might bypass the new change of policy by making compulsory mask-wearing a condition of carriage, yet this would no doubt prove both politically and logistically difficult.

A survey by YouGov has also suggested that the majority of Britons would support continued mask-wearing on public transport, which is in direct contradiction to the Government’s shift towards personal responsibility.

Caroline Lucas, MP for Brighton Pavilion and Co-Leader of the Green Party, said it was “reckless and unfair” to allow people to choose “whether to put others at risk” or not, drawing comparisons to enforced speed limits, which are of course mandatory to protect everyone.

If freedom to drive at 100mph is restricted because of risk to others, why not apply the same logic to mask-wearing on public transport, esp given millions still unvaccinated & some immuno-suppressed? pic.twitter.com/e7rAFWZ2L4

Transport unions have also come out in opposition to the shift in policy, which they say will put transport workers at risk.

“To end the requirement to wear masks on public transport would be an act of gross negligence by the government,” Unite national officer for passenger transport Bobby Morton told the BBC.

“Rates of infection are continuing to increase and not only does mask wearing reduce transmissions, it helps provide reassurance to drivers and to passengers who are nervous about using public transport.

“The idea of personal responsibility and hoping that people will wear masks is absolutely ridiculous, members are already reporting there is an increase in passengers ignoring the rules on mask wearing.”

There is uncertainty as to how many will continue to wear a face covering on the bus or Tube moving forward, many will no doubt feel safer with one on, or at least travelling in a vehicle where the majority are wearing face masks. But what is certain is that something which barely anybody would dream of donning not 18 months ago has become such a part of travel, that the prospect of journeys without face masks has sparked widespread debate within the transport industry, which will no doubt continue if cases continue to rise.