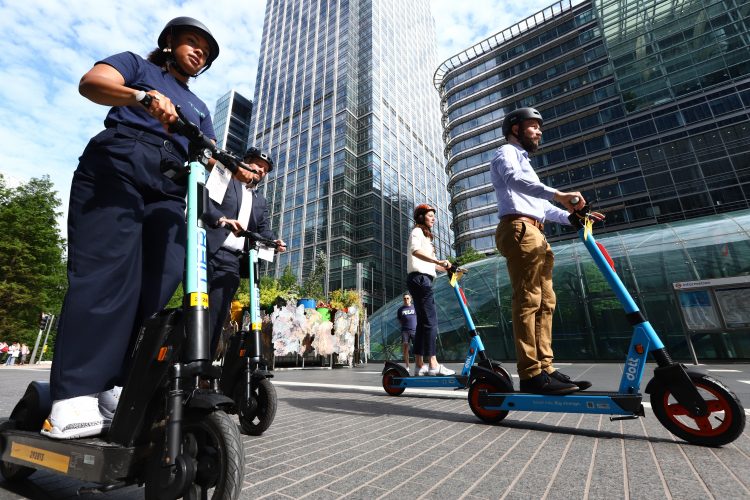 Dott, TIER, and Lime were selected to take part in the trial Credit: TfL

Londoners will be able to rent e-scooters in the capital for the first time today after TfL’s decision to trial the micromobility mode in select areas of the city.

Following the UK Government’s announcement to legalise rental trials of e-scooters run by local authorities, TfL and London Councils launched an open and competitive procurement process for the planned trial of an e-scooter rental scheme in London. Operators Dott, Lime and TIER were appointed to take part in the trial following the process, where their ability to meet strict safety requirements and high operating standards was carefully considered.

The trial is initially launching in Canary Wharf, Ealing, Hammersmith & Fulham, Kensington & Chelsea and Richmond, with Tower Hamlets acting as a ‘ride through’ area.  The trial will begin with this core group of boroughs, with TfL expecting more to join throughout the summer.

E-scooters will be priced at between £3.25 and £3.40 for a 15-minute ride – and are only allowed to be ridden on roads, not pavements. Each operator will charge a fee to unlock as well as a per minute fee for each ride.

TfL, London Councils and participating boroughs have actively engaged with people with accessibility needs throughout the development of the trial, including TfL’s Independent Disability Advisory Group.

Rental e-scooters offer a number of benefits over private e-scooters which make them more suitable for a trial on London’s streets, including always-on lights, GPS controlled parking and no-go zones  - meaning they can only be parked in specified locations not obstructing the pavement and cannot be taken in certain areas, such as tunnels – and a unique identification number on every vehicle.  The safety standards required will go further than those set out at a national level, by requiring:

The operators will also have additional safety mechanisms in place, including ‘first ride policies’, meaning riders must take an e-learning safety course before they hire for the first time, and lower maximum speeds in place for their first ride.

TfL says the trial will be regularly monitored and reviewed to make sure it is safe for everybody, with changes made to its operation wherever improvements are identified.

“As we look to our capital’s future, we want to ensure a green and sustainable recovery from the pandemic. We know that a huge portion of car journeys in London are for very short distances, and we want to explore how e-scooters can act as an innovative alternative. E-scooters have been on our streets for some time now but with very little regulation,” said Will Norman, London’s Walking & Cycling Commissioner.

“This trial will have safety at its heart, bringing in rigorous precautions and parking measures while taking the needs of all road users into account and seeing what role e-scooters can play in London’s future.”

Helen Sharp, TfL’s e-scooter trial lead, added:  “Safety remains our number one priority for this trial and we will work closely with the e-scooter operators, London Councils and the boroughs to ensure rigorous standards are consistently met. We will also continue to work closely with all of our stakeholders, including TfL’s Independent Disability Advisory Group, to ensure that the trial meets the needs of everybody living in, working in and visiting the trial areas. This new trial will provide the data and insights we need to determine the longer-term role e-scooters could play in our strategy for a greener and healthier future for London.”