Lime will launch its e-scooters in a suburb of Berlin in a bid to increase the last-mile options for travellers in the area and take even more cars off the city’s streets. 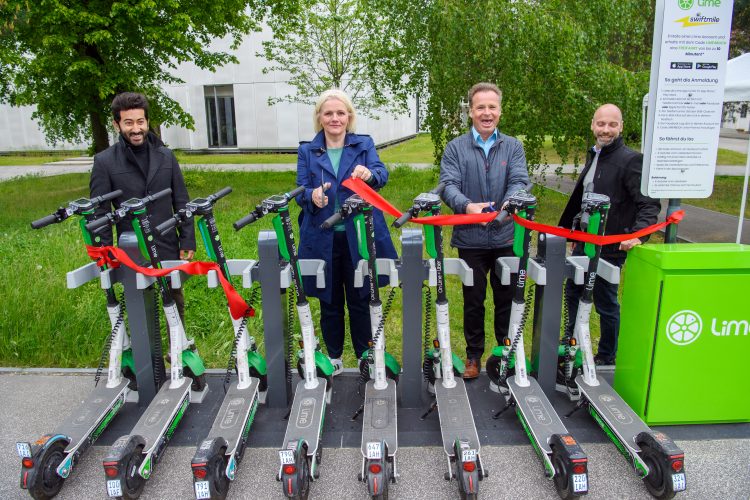 E-scooters are no stranger to Berlin’s city centre, with more than 16,000 dotted around the German capital. Now as part of a unique pilot project, “Conquering the ﬁrst and last mile together” with the Pankow district and the Berlin Senate Department for Environment, Transport and Climate Protection, micromobility operator Lime is offering dockless e-scooters in Berlin-Buch via its app.

This makes Lime the ﬁrst e-scooter provider to expand its operations to the Brandenburg border (a state neighbouring Berlin). Additionally, Lime is working with micromobility charging firm Swiftmile to add ﬁxed charging stations for e-scooters at highly frequented hubs in the service area. To start the pilot, a total of 30 e-scooters and three charging stations are available in the business area around Helios Hospital Berlin-Buch.

The aim of the initiative is to make commuters from Berlin and the neighbouring Brandenburg as attractive as possible for traveling the “last mile” to their destination. The Swiftmile charging stations ensure “an orderly cityscape” and allow Lime to save logistics costs in order to ensure the proﬁtability of the project in the long term.

“We are serious about our goal of getting even more Berliners to leave their cars behind. As a Berlin company, we want to do our part to improve mobility throughout the entire city, and are therefore investing heavily,” said Lime-Deutschland General Manager Jashar Seyﬁ. “This includes the connection of suburbs, such as Berlin-Buch, with sustainable micromobility to supplement the low density of surrounding public transport stops.

“This pilot project with the Pankow district and the Berlin Senate Department is a ﬁne example to show how a sustainable trafﬁc turnaround can be achieved not only in city centres. The project is fully ﬁnanced by our e-bike and e-scooter ﬂeet in the city centre.”

The project relies on a partnership between the city, Lime and Swiftmile, and will be evaluated after six months. Lime says it will provide anonymised data on the progress of the project and its impact on local businesses, and if there is great demand, additional charging stations can be added.

“A true car-free Berlin is only possible when alternative transportation modes are expanded beyond the city centre—and when those modes have the infrastructure to support charging and parking needs,” said Magnus Johansson, Swiftmile EMEA Managing Director.

“Swiftmile is proud to work with Lime in its efforts to bring sustainable transport to the Pankow district, starting with frontline workers and students.”

“E-scooters can play an important role in the mobility transition: They are climate-friendly, quiet and, in the best case, serve routes that conveniently complement local transport—like here on the Buch campus, where employees will be able to travel to and from the S-Bahn on future commutes,” added Regine Günther, Senator for Environment, Transport and Climate Protection.

“I welcome Lime here on the outskirts, in an important health location, and hope to see this type of service expansion to other locations. I wish all users a safe journey.”