Four regions in France have placed orders for dual powered hydrogen-electric trains, in a bid to significantly cut down on emissions from their rail networks. 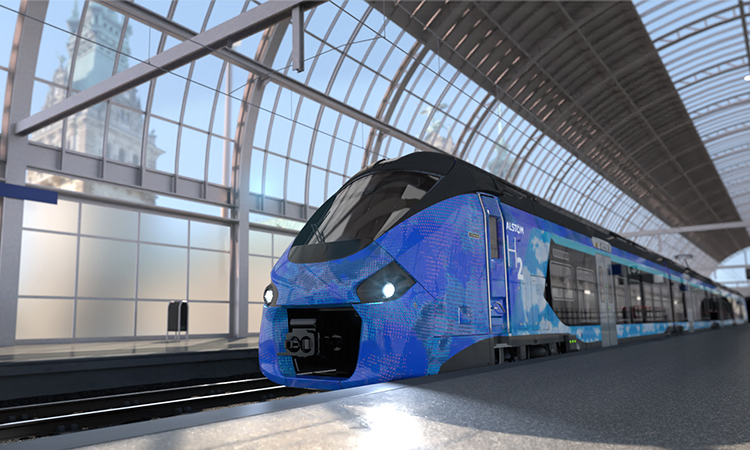 This is what the new hydrogen-electric train could look like Credit: Alstom

The very first orders for dual powered hydrogen-electric trains in France have been placed this week, in what represents a significant advancement in the technology which could revolutionise sustainable transport.

Acting on behalf of the regions of Auvergne-Rhône-Alpes, Bourgogne-Franche-Comté, Grand Est and Occitanie, SNCF Voyageurs has placed an order with manufacturer Alstom for the first 12 dual mode hydrogen-electric trains (plus two optional trainsets) in a contract worth a total of almost €190 million. Alstom says the four-car, 72m-long Coradia range train has a total capacity of 218 seats and the same dynamic performance and level of comfort as the dual mode electric-diesel version.

“France has everything it needs to become a hydrogen champion: the French government is fully committed to turning this ambition into reality. We will be covering 47 million euros of development costs for France’s first regional hydrogen-powered train. I am delighted that this support has enabled the four partner regions to confirm their order for the first 14 trains,” said Jean-Baptiste Djebbari, Minister Delegate for Transport, French Ministry of the Ecological Transition.

“Environmental protection is a major issue and without doubt the greatest challenge of the 21st century. This order for the first Coradia trains in Auvergne-Rhône-Alpes is the next step in our region’s ambition to boost green growth focusing on innovation, business development and job creation,” said said Laurent Wauquiez, President of the regional council of Auvergne-Rhône-Alpes.

“Since our commitment to the European project Zero Emission Valley, we have aimed to make our region – home to almost all players in the hydrogen sector – one of the lowest carbon regions in Europe, by developing applications for this new source of energy. Hydrogen trains are an innovative alternative to the diesel trains running on our non-electrified lines.”

“Alstom is particularly proud to be contributing, alongside SNCF Voyageurs and the Auvergne-Rhône-Alpes, Bourgogne-Franche-Comté, Grand Est and Occitanie regions, to a cleaner and more sustainable mobility solution. Alstom is the first rail company in the world to launch a hydrogen train onto the market and to master this technology through its iLint train, developed for the German market,” added said Jean-Baptiste Eyméoud, President of Alstom France.